Storm weather arising from a hurricane could hit Nova Scotia Wednesday night, with a low but not zero probability of hurricane-force winds hitting Canada’s east coast.

For Nova Scotia, as well as parts of New Brunswick and Prince Edward Island, Environment Canada has issued a tropical cyclone statement. 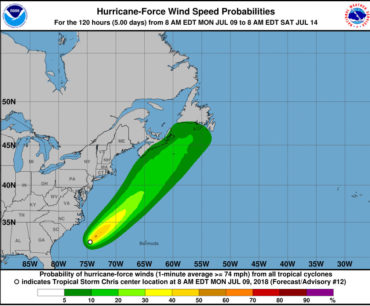 A forecast map on the NHC website suggests there is a five to 10 per cent probability that the south shore of Nova Scotia will be hit by hurricane-force winds (120 km/h or greater). More likely than not, the hurricane force winds will be confined to an area hundreds of kilometres off the Atlantic coast of the United States, the forecast map published at 8:00 a.m. Monday suggests.

“There is a good deal of uncertainty at this time in the forecast track  of this system,” Environment Canada said Monday of  Storm Chris. “The Canadian Hurricane Center is closely monitoring this developing storm.”

Environment Canada issues special weather statements, which are not as urgent as watches or warnings, to let people know that conditions are unusual and “could cause concern.”

Hurricane Matthew is estimated to have caused about $150 million in economic losses in Canada alone in October 2016, Impact Forecasting said earlier. Matthew made landfall near McClellanville, moving northeast and dumping more than 200 mm of rain on parts of Nova Scotia and Newfoundland, as well as winds of nearly hurricane speed.

In 2017, three North Atlantic hurricanes (Harvey, Irma and Maria) cost the property and casualty insurance industry a combined total of more than US$90 billion, Swiss Re reported earlier.

In 2012, Canada was affected by Hurricane Sandy, which was downgraded to post-tropical-storm status before it made landfall about 200 kilometres south of New York City, causing about US$30 billion in insured losses industry-wide.