What could cause more flood woes in B.C.

David Campbell, head of the B.C. River Forecast Centre, said Friday that an extended period of dry weather is expected across the province next week. 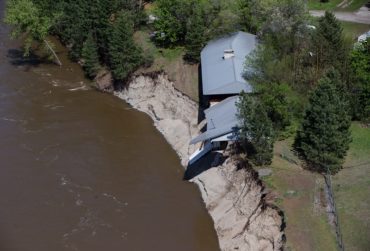 A portion of a house that collapsed along the flooded Kettle River is seen in an aerial view near Grand Forks, B.C., on Saturday May 12, 2018. Thousands of people have been evacuated from their homes in British Columbia’s southern interior as officials warn of flooding due to extremely heavy snowpacks, sudden downpours and unseasonably warm temperatures. THE CANADIAN PRESS/Darryl Dyck

The temperature over the past three weeks has been about five degrees above normal in the Interior, Campbell said on a conference call.

“We’re really racking up to a month of hot weather by the end of next week and that’s driven rivers up much, much earlier than normal.”

Campbell said higher temperatures could mean more trouble for parts of southeast B.C., that were flooded Thursday following two days of heavy rain, peaking the Kettle, West Kettle and Granby rivers to levels higher than those recorded during devastating floods 70 years ago.

The Regional District of Kootenay Boundary said nearly 1,400 properties were ordered evacuated, with waters rising so quickly that many people were trapped in their homes in Grand Forks.

Chris Duffy, executive director of programs with Emergency Management BC, said 31 evacuation orders have been issued across the province, affecting 1,993 homes. Evacuation alerts, warning residents they may have to leave with little notice, are in place for 930 residences.

Duffy said 23 states of local emergency were also in effect and sandbag machines were brought in from Saskatchewan while firefighters were deployed to assist with sandbagging in various communities.

“I understand it was a challenging evening last night, the Grand Forks downtown area lost electricity so that’s impacted some residences and businesses that stayed behind in that evacuation area,” he said. “That’s been absolutely challenging.”

Duffy said people should stay away from fast-moving water and not drive through areas that are flooded.

“We encourage local governments and First Nations right now to be looking at activating their operation centres,” he said. “As we start to consider the lower Fraser (River) we’re in dialogue with those communities so we can get some advance planning and communications in place.”

The Regional District of Kootenay Boundary said in a news release that the focus was now on reaching trapped residents, determining property and infrastructure damage, and creating a re-entry plan for people who were forced from their homes.

The River Forecast Centre said flood warnings are in effect on waterways throughout the Okanagan and Boundary regions, along the Canada-U.S. border, while flood watches are posted for many other rivers and streams, including the Similkameen and Tulameen rivers west of Grand Forks.

Parts of the town of Osoyoos were ordered evacuated Thursday and flooding was also reported in Keremeos, Cawston and Okanagan Falls.

Osoyoos declared a state of local emergency and ordered homeowners with flooded basements to stop pumping the water back into the town’s sewer system.

“The act of causing this water to enter the sewer system in current conditions is causing pump infrastructure to function beyond capacity, which may result in a breakdown of the town sewer management system,” the town said in a news release.