SHERBROOKE, Que. – The lawyer for one of three men charged with criminal negligence in the Lac-Megantic rail disaster that killed 47 people began his closing arguments today. 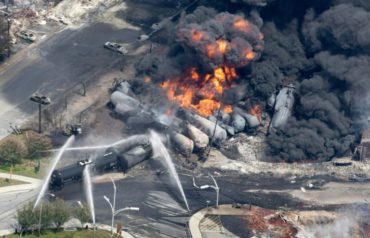 Smoke rises from tanker cars in downtown Lac-Megantic, Que., on July 6, 2013. The Transportation Safety Board says the country’s two largest railways and the regional carrier responsible for the Lac-Megantic fire failed to meet their obligations for filing accident information.The federal agency says a total of 254 accidents were unreported or reported late to the TSB over a seven-year period. THE CANADIAN PRESS/Paul Chiasson

Gaetan Bourassa says the trial is for his client, Jean Demaitre, and not for Montreal, Maine and Atlantic Railway, whose reputation is all but irredeemably tarnished in Quebec following the tragedy.

Bourassa also told the 14 jurors today they must make a distinction between negligence and criminal negligence.

Demaitre, who was head of train operations that fateful night in 2013, and ex-colleagues Tom Harding and Richard Labrie each face one count of criminal negligence causing the death of 47 people. They have all pleaded not guilty.

Labrie’s attorney will present his arguments later today, while Harding’s is expected to do likewise Friday. The Crown summed up its case Wednesday.

On July 6, 2013, a runaway train owned by Montreal, Maine and Atlantic Railway carrying crude oil from the United States derailed in Lac-Megantic and exploded, killing the 47 and destroying part of the downtown core.