Residents in the Crowsnest Pass are still without power after a wind-whipped fire that forced about 150 people living in the town of Coleman from their homes. 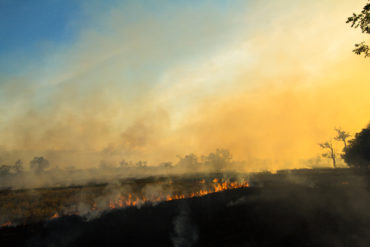 The blaze in the Alberta mountain community was one of several driven by strong winds that threatened towns and forced evacuations in southern Alberta and Saskatchewan on Tuesday.

The mayor of the Crowsnest Pass says things have calmed down somewhat after a frantic day.

“The wind has died down. We’ve got helicopters bucketing the area. There’s still no power,” Mayor Blair Painter said Wednesday.

“We were able to divert the fire so it hasn’t affected those areas. I’m hoping we’re able to get those people back just as soon as possible.”

Painter said the blaze was probably caused by downed power lines as a result of strong winds. He said the fire jumped Highway 3 and started about one kilometre west of the evacuated area.

Power lines that reportedly landed on the highway itself will have to be dealt with before traffic is eventually allowed through, he said.

However, no one was injured and a welcome centre was set up in the nearby town of Pincher Creek where more than 80 residents registered.

Painter said it was a wild scene when the fire started.

Large wall of smoke from my position 8km S of Leader at 420pm #skfire pic.twitter.com/53tpaQS26o

“We had 130 kilometre-an-hour gusts. Probably about 100 kilometres an hour steady and then gusts up to 130. Guys were even having a hard time standing up so, yeah, it was pretty scary.”

Painter said there may be some damage to structures, but it doesn’t appear any dwellings were lost.

“It’s good to see the helicopters have been up since first light this morning so that’s a good sign. I’m looking out my window and I’m not seeing much for smoke, so that’s another good thing. Hopefully we’ve got control on it.”

In Saskatchewan, emergency authorities in the Rural Municipality of Deer Forks said wildfires that resulted in the evacuation of the communities of Leader and Burstall have been contained.

Residents were being allowed to return to their homes Wednesday, the Saskatchewan government said.

A helicopter armed with a bucket is now helping fight an out of control wildfire west of Coleman in the Crowsnest Pass. #ABFire @CTVCalgary pic.twitter.com/NHclFubFts

Fire on the way to Airdrie along highway 2. #yyc #abstorm pic.twitter.com/UbIxsOTK3P

Evac order still in effect for Leader and Burstall. Tons of scorched earth and even some flames south of town. #SKfire @GlobalRegina pic.twitter.com/Iku3JZFLWP