The Fort McMurray Airport Authority (FMAA) is suing FM Global for more than $34 million, contending that the insurer breached its obligations under a policy in place during the Fort McMurray wildfire in May 2016.

In a statement of claim filed with the Court of Queen’s Bench of Alberta in Edmonton last month, the FMAA alleges that it submitted a proof of loss to FM Global for more than $34.2 million in wildfire damages, which included lost revenue associated with various airport fees. 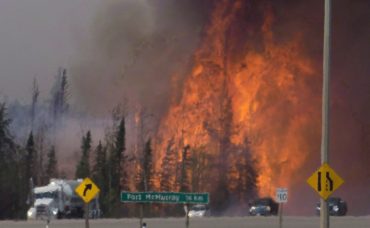 Heat waves are seen as cars and trucks try and get past a wild fire 16km south of Fort McMurray on highway 63 Friday, May 6, 2016. The “beast” of a wildfire that charred Fort McMurray, Alta., was named Canada’s biggest weather story of the year in an annual list compiled by the country’s top meteorologists. THE CANADIAN PRESS/Jonathan Hayward

FM Global advised the airport in April 2018 that its proof of loss had been rejected and that the insurer would not be indemnifying for all damages and losses as set out in the proof of loss, according to the airport’s statement of claim. Interim payments have been made to FMAA for a portion of the Authority’s losses caused by the wildfire, the claim adds.

“Out of respect for each of our policyholders our relationships are kept confidential,” an FM Global spokesperson told Canadian Underwriter then. The insurer reiterated that statement Monday.

“The Fort McMurray Airport Authority is currently in negotiations with its insurance company and we hope to come to a mutually agreeable resolution,” Joanne Meredith, manager of marketing, communications & experience with FMAA, told Canadian Underwriter on June 12. “We have no further comment at this time.”

The airport is seeking aggravated damages of $1 million and punitive and exemplary damages of $1 million. “FM Global owed the Airports and the Authority a duty of care to ensure that proper and adequate insurance coverage was in place to indemnify the Authority for losses or damages resulting from the wildfire,” the statement of claim says. “FM Global’s refusal to honour its obligations under the policy is a breach of its duty of good faith, for which the plaintiff is entitled to aggravated, punitive and exemplary damages.”

The statement of claim accuses the insurer of representing to the airport that lost revenues from airport fees would be covered under the policy. The fees, which the airport describes as a “significant source of income,” include airport improvement fees, as well as terminal and landing fees.

“FM Global represented to the Airports and the Authority that in the event of a loss, the policy would provide coverage for lost revenue, including airport fees,” the statement of claim says. “FM Global provides insurance coverage to airports in Canada and has held itself out to the Airports as having specialized experience, knowledge, skill and expertise in designing and providing insurance products that provide insurance coverage that meet the needs and requirements of airports, including the Authority.”

FMAA also alleges it believed that the time element coverage provided by the policy would extend to the loss of both direct and indirect customers and suppliers, regardless of how indirect the connection to the loss.

More News
Related
Landscaping ‘absolutely key’ to reducing wildfire risk: ICLR
Why Canadian insurers paid $1.33 billion for cat claims in a benign cat year
Claims whack-a-mole: what’s going on in property lines?
Why your clients may not be covered when there’s an active wildfire