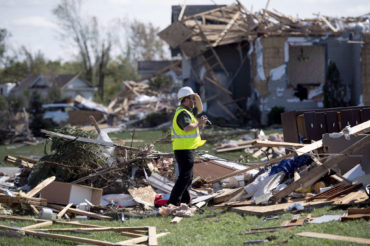 Dr. David Sills, a severe weather scientist for Environment Canada, takes photos to help determine the category of a tornado in Dunrobin, Ont., west of Ottawa, on September 22, 2018. The Insurance Bureau of Canada says severe weather caused $1.9 billion in insured damage last year. An early-May windstorm that affected Ontario and parts of Quebec and topped $410 million — with $380 million of this damage being in Ontario. THE CANADIAN PRESS/Justin Tang

When pricing property coverage in the future, it’s time for the industry to ask itself: “How are we going to deal with changes in weather?”

Historically, insurance products have been priced based on data and loss history, observes Ernest Mashingaidze, who was recently named a CIP Society’s National Leadership Award winner. But it doesn’t account for what may happen in the future, thanks to climate change.

“It’s actually getting worse and worse when you look at catastrophes,” Mashingaidze told Canadian Underwriter in an interview. “I think the one thing we’re going to have to deal with as an industry is pricing the insurance product with catastrophic weather changes.”

The challenge, he said, is to figure out whether the premium matches the risk when the risk itself is changing. “How is the product going to be priced given the increase in catastrophes?” he asked.

Aside from pricing concerns, Mashingaidze talked about the impact of climate change on the industry as a whole.

He said the very way insurance professionals are handling claims arising from severe weather has changed over the years. Given the increasing frequency and severity of natural catastrophe losses, adjusters will need a broader skill set, he said. For example, whereas an adjuster may have focused on just looking at roof damage, perhaps now they need to know more about how a windstorm can knock over entire structures.

“Most of our adjusters here at Wawanesa are dealing total loss claims,” said Mashingaidze, who works in property claims with Wawanesa Insurance. This is “instead of five or 10 years ago, when you might have just been dealing with roof claims and smaller claims like that.”

Mashingaidze spoke personally and not as a representative of his company. Canadian Underwriter reached out to him after winning the award to ask about the state of the insurance industry and property claims.

Given the policy changes that come with more extreme weather, insurance professionals need to make sure their customers have the coverage they need. More people are facing total losses today than before; few know the ins and outs of what they’re actually covered for, said Mashingaidze said. For example, he said, insurance pays to a certain limit, and the insured may not be aware of those limits or how they are calculated. Maybe the client doesn’t have guaranteed replacement cost, or he or she is covered only to a certain point – say $100,000 – but the loss is double that.

Mashingaidze gave an example in which the limit was paid out for a property owner’s dwelling, but his contents were covered for actual cash value, so a maximum payout wasn’t possible.

“Explaining to him why we were maxing out every other limit he had except for contents was pretty difficult,” he said. “This gentleman had been insured with us for, I think, 20 years and this was the first claim he had. So it put me in a very difficult position.”

It does generate an opportunity to show value by creating educational opportunities for clients. Insurance pros can show their expertise by working with clients to teach them about what is covered and what the limits are. “I think one of the challenges we have is the lack of cross-communication between the policy itself and the customers,” Mashingaidze said. If customers don’t understand the policy, “we face that challenge of upset customers.”