Powerful wind storm knocks out power in parts of the Maritimes

HALIFAX – More than 50,000 homes and businesses were temporarily without electricity across the Maritimes on Tuesday morning as a powerful rain storm downed power lines, damaged buildings and forced the closure of some schools and businesses.

The storm moved into the region overnight and the winds picked up through the morning, with gusts hitting 91 kilometres per hour in the Halifax area. 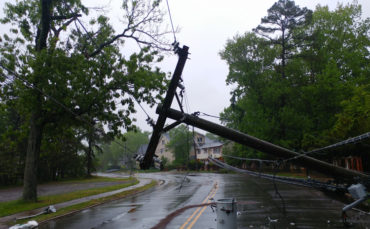 Just after 8 a.m., more than 50,000 Nova Scotia Power customers were in the dark. In southern New Brunswick, about 11,000 NB Power customers had no electricity, and more than 400 had lost power in Prince Edward Island.

The Canadian Red Cross says no one was injured, but more than 100 tenants were forced to leave one building in the Regency Towers complex on Heather Way, and a smaller building at 57 Ocean Court.

In all, 63 tenants registered with the Red Cross.

Also in the Saint John area, about a dozen partial and full road closures were imposed due to localized flooding.

In Nova Scotia, photos from social media showed downed trees and fallen power lines and what appeared to be the collapsed remnants of a small building under construction in Dartmouth, N.S.

By noon, wind warnings remained in effect for the province’s eastern shore and eastern Cape Breton.

Environment Canada said southerly gusts up to 110 km/h were expected in exposed areas.

Meanwhile, wind and rainfall warnings were issued for southern and western Newfoundland, the Avalon Peninsula and parts of Labrador, where blowing snow warnings are in effect north of Postville and Makkovik.

This report by The Canadian Press was first published Dec. 10, 2019.