DRUMHELLER, Alta. – Rising water caused by an ice jam on the Little Red Deer River in central Alberta prompted officials to ask some people to leave their homes Monday, while further southeast on the Rosebud River, residents weren’t being given a choice.

The Town of Drumheller issued a mandatory evacuation order late Monday for residents and businesses in the community of Wayne and along Hwy 10X due to high water in the Rosebud River. 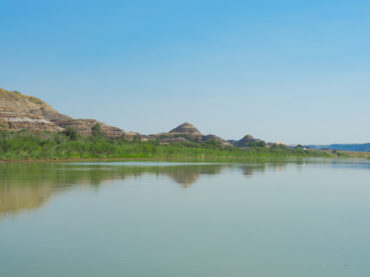 All evacuated residents were told to register at the Drumheller Stampede and Ag Society Building.

Dave Brand, director of community and protective services for Red Deer County, said the county was notifying 30 residences in the Silver Lagoon and Red Lodge Estates areas of the situation.

Brand said the ice jam is “very susceptible” to the warmer weather the area is experiencing, along with “anything else” that might be coming down the Little Red Deer River.

The ice was blocking the river at Highway 857, causing localized flooding of roads and property.

Brand noted the county is working on a plan with Alberta Environment to break up the ice jam gradually in an attempt to control the release of backed up water.

Flooding also affected the northern part of the province Monday.

The Village of Rycroft, about 500 kilometres northwest of Edmonton, said in a statement on its website that basement flooding and sewer backups are possible and residents should do what they can to minimize the amount of water flowing into the sewage system.

Roadblocks were set up and RCMP were going to door to door to find out if residents needed assistance, while drivers were being urged to stay off flooded streets.