State of emergency in St. John’s stretches into sixth day

ST. JOHN’S, N.L. – Commercial flights have resumed in and out of St. John’s, N.L., today, as eastern Newfoundland continues to dig itself out from last week’s record-breaking blizzard.

Today is the sixth day the provincial capital has been under a state of emergency after a storm dumped more than 76 centimetres of snow on the city. 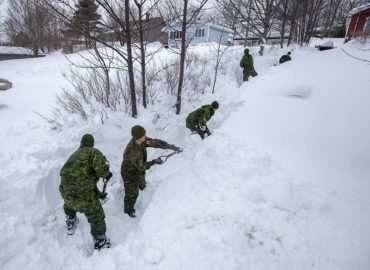 Soldiers from the 4th Artillery Regiment based at CFB Gagetown clear snow at a residence in St. John’s on Monday, January 20, 2020. The state of emergency ordered by the City of St. John’s continues, leaving most businesses closed and vehicles off the roads in the aftermath of the major winter storm that hit the Newfoundland and Labrador capital. THE CANADIAN PRESS/Andrew Vaughan

Hundreds of Armed Forces personnel have been called in to help get things moving again, and Premier Dwight Ball said Tuesday there have been hundreds of calls for assistance from vulnerable residents.

Grocery stores were permitted to open Tuesday, with the City of St. John’s advising people to stock up for at least 48 more hours.

Stores received the same permission today, and family doctors and specialist clinics were allowed to open in an effort to take pressure off hospital emergency rooms.

The city has also given taxi companies the green light to resume operations, but personal vehicles are still ordered to stay off the road unless they’re headed to a business or clinic that is allowed to open.

RCMP announced Tuesday evening that the search for Joshua Wall, a 26-year-old man who’s been missing since Friday, has been suspended.

Spokeswoman Glenda Power said in a statement that despite “exhaustive efforts,” Wall – who was last seen leaving his home for a friend’s house at the height of the storm on Friday – has not been found.

“Bay Roberts RCMP continue to urge residents in the area to check their properties, including backyards, sheds, barns and other outbuildings, as well as vehicles, in the event Joshua sought shelter there,” Power said.

This report by The Canadian Press was first published Jan. 22, 2020.