What’s changed about Millennials in the workplace? 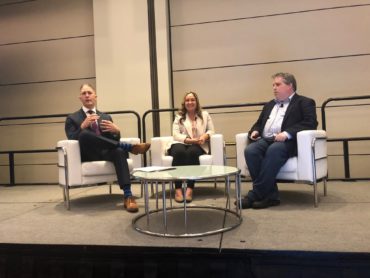 From left, John McNeil, Natasha Reichen and Trevor Buttram discuss the future of talent at the CIAA Claims Summit in Toronto on Oct. 10, 2019.

Millennials aren’t necessarily job hoppers, but they don’t want to feel stuck. So if you want to keep your young, talented staff – and attract new ones – make sure you’re showing them how the insurance industry can offer stability and growth opportunities, experts advised.

The upper end of the Millennial age group is pushing 40 years old (they were generally born between the early 1980s and mid-1990s). Also referred to as Generation Y, or Gen Y for short, they make up 39% of the workforce, the largest age group in the industry, according to the Insurance Institute of Canada’s 2017 demographics study.

That means a lot of them aren’t simply feeling things out with their whole careers ahead of them, Trevor Buttram told attendees of the recent Canadian Independent Adjusters’ Association Claims Summit in Toronto. “They’re hitting that mid-career stride and starting to think about some of their next moves into leadership and – if they’re not already there – into senior leadership as well.”

They also have invaluable insights on the various challenges the insurance industry is facing, whether it’s service delivery or attracting younger versions of themselves, he said.

“Our talent can’t feel like their career is something that’s being done to them. It’s something they actually have ownership of and the opportunity to shape and steer the direction,” Buttram said before he was joined by John McNeil of Humber College and Natasha Reichen of TalentEgg for a panel discussion on the future of talent.

“They’re actually looking at working for you long term. The fact is, they don’t want to be stuck,” McNeil added. “Many of them are worried about working in call centres, but I think what’s really important here is showing them career mapping or showing them a career path. Show them this is how you can grow within this company. It will certainly help with retention.”

Guy Fracker, who gave a presentation on the future of claims at the same event, had no problem with job hoppers. “I would be more than happy to hire somebody who is interested in hopping jobs so that I can borrow their brain for 24 months,” he said. “I don’t care about job-hopping. I want people who can help connect.”

But if you’re still worried about losing someone so quickly, offering career progression is attractive but “it doesn’t have to be at lightning speed,” Reichen said. “So how an organization infuses talent development to keep them engaged, whether it’s taking a lateral move to develop a new skill set … that would be helpful [to attract them].”

Their career path also doesn’t have to be a straight line shooting upwards, she explained. Gen Yers change jobs because they want to learn a new skill set and try something different. Offering those same opportunities means you have a better chance of hanging on to them.

“A lot of students that I’ve spoken to on campus … they want to understand what their options are. It doesn’t necessarily have to be vertical progression,” Reichen said. “They want to know a little bit about everything – it could be lateral; it could be like snakes and ladders with the swiggling career path.”

The bottom line is they want variety, she added. “They want to get an understanding of what’s out there and what careers are possible.”