Why insurers can expect claims from the Raptors parade

It won’t surprise at least one lawyer to hear about insurance claims stemming from the Toronto Raptors championship parade.

There were plenty of exposures present during the event on June 17, mainly because of a lack of resources available and poor planning by organizers which led to the inability to appropriately control the crowds, said Weston Pollard, partner at Edwards Pollard in Oakville, Ont., where he focuses on personal injury law and insurance defence. 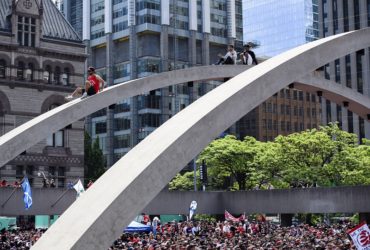 Fans climb the arches to get a better look during the 2019 Toronto Raptors Championship parade in Toronto on Monday, June 17, 2019. THE CANADIAN PRESS/Nathan Denette

Fans rushed into the streets of downtown Toronto for the parade. Some climbed light poles or bus shelters for a better view. At the square, fans climbed the famed arches. What if someone fell?

But what if someone needed medical attention? If they couldn’t be reached in a reasonable fashion and it’s strictly because of overcrowding, “those kinds of things are going to creep up, and I think there is some exposure in those circumstances,” Pollard warned. “I don’t think the city took every reasonable step here to protect the people.”

People potentially becoming dehydrated or needing medical help also caught the eye of Gary Hirst, president and CEO at CHES Special Risk in Toronto as an exposure. “Whoever organized it … would in my view have an exposure to liability if people were fainting [or] if someone had a heart attack and the ambulance couldn’t get there on time,” he said. “It’s just the overall planning of the event could manifest itself in some sort of liability claim.”

It’s likely that claims will also come from businesses, Pollard said. If they suffered a broken window, for example, their carrier will likely look to the city to recoup those costs.

“They’ll go through their own insurance and then I bet you we see some subrogated claims against the city come in from insurers who have paid out on these claims which we can directly trace back to crowd control issues,” he said.

The crowd control argument could also arise with the shooting incident that happened just outside the square during the celebrations. As many people ran, others got trampled, which could raise questions as to whether the city properly managed the flow of people in and around the square.

On the parade route, there were no initial reports of anyone hit by a bus, but a real risk was present. People ran alongside and between vehicles despite police attempts to keep a perimeter. If something happened, Hirst noted, the person who would have been hit by the bus would not have received the blame, despite “common sense” showing that the person should’ve known to not be running beside it on a public road.

“The auto insurers would have something to say about an injury that was caused if you tripped over and fell under the wheels,” he said. “Ultimately, it would be up to the auto insurers to subrogate against the organizers.”

Reasonableness would be the main question here, Pollard noted.

“It will be handled like any regular lawsuit. If there are multiple ones, then the insurer for the bus company will have to take a hard line with it and say, ‘Your actions were not reasonable that day. If anyone is at fault, it’s not our driver,’” he said. “It’s got to be the city and the organizer. Bring them in as a third party and say, ‘It’s on you, city.’”

More News
Related
Your drunk client arrives home safely. Why your exposure does not end there
Legalization of marijuana calls for ‘more thorough’ risk assessment from brokers: OIAA speaker
Exclusion clause for ‘conversion’ in comprehensive auto policy ‘does not come close’ to being easily intelligible: Court
Does CGL’s duty to defend apply to the insurance policy as a whole?