The year 2016 marked three consecutive years of record warmth for the globe, the National Oceanic and Atmospheric Administration (NOAA) reported on Wednesday.

The 2016 globally averaged surface temperature ended as the highest since record keeping began in 1880, the National Oceanic and Atmospheric Administration said. Photo: NOAA.

“With a boost from El Niño, 2016 began with a bang,” NOAA said in a press release. “For eight consecutive months, January to August, the globe experienced record warm heat. With this as a catalyst, the 2016 globally averaged surface temperature ended as the highest since record keeping began in 1880,” scientists from NOAA’s National Centers for Environmental Information said in the release.

Despite the cooling influence of a weak La Niña in the latter part of the year, the year ended with the third warmest December on record for the globe, with an average temperature 1.42°F above the 20th century average.

In a separate analysis of global temperature data released at the same time, scientists from NASA also found 2016 to be the warmest year on record. 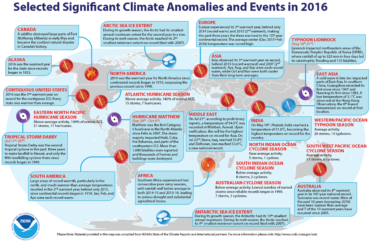 NOAA also reported on Wednesday that new research showed that the global average of mild weather days will drop, with dramatic declines for some, increases for others. NOAA said in a statement that its scientists and those from Princeton University have produced the first “global analysis of how climate change may affect the frequency and location of mild weather.” Scientists defined mild weather as temperatures between 64-68°F, with less than a half inch of rain and dew points below 68°F, indicative of low humidity.

Published in the journal Climatic Change, the new research projects that globally the number of mild days will decrease by 10, or 13%, by the end of the century “because of climate warming from the build-up of greenhouse gases in the atmosphere.” The current global average of 74 mild days a year will drop by four days by 2035 and 10 days by 2081 to 2100. The statement said that scientists predict the largest decreases in mild weather will happen in tropical regions because of rising heat and humidity. The hardest-hit areas are expected to be in Africa, Asia and Latin America, where some regions could see 15 to 50 fewer days of mild weather a year by the end of the century.

People living in the mid-latitudes, which include much of the United States, as well as many mountainous areas around the world, will gain mild weather days on average, the study found. The biggest winners will include communities along the border with Canada in the Northeast, Midwest and Northwest, as well as many parts of Canada, the statement said.