ST. JOHN’S, N.L. – More icebergs have drifted into major shipping lanes off Newfoundland, forcing ships to go far out of their way to steer clear of the massive ice mountains. 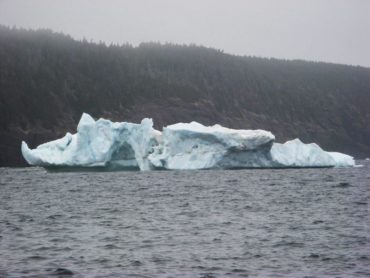 An iceberg can be seen in the water at Flat Rock, N.L., Thursday May, 1, 2008. The iceberg is one of several dotting the east coast of Newfoundland, attracting a steady flow of onlookers curious to get a glimpse. THE CANADIAN PRESS/ Tara Brautigam

“It’s the only place in the world where icebergs intersect in a major shipping lane like that,” Gabrielle McGrath, commander of the United States Coast Guard International Ice Patrol, said Monday from her office in New London, Connecticut.

“The ships are having to go out of their way to get around that iceberg limit … so it’s taking them a lot longer to get across the Atlantic.”

McGrath said 616 icebergs have already moved into the North Atlantic lanes so far this season, compared to 687 last year by the late-September season’s end.

The influx started in late March, she said.

There were 37 icebergs observed on March 27, but a low pressure system of strong counter-clockwise winds dramatically shifted big ice originating from Greenland glaciers farther south down the eastern Newfoundland coast.

As a result, three days later there were 272 icebergs in those shipping lanes – roughly the same area where the Titanic went down in 1912 after striking an iceberg.

Canadian Coast Guard Ice Operations said there were about 481 icebergs in the area as of last Thursday.

Those kinds of numbers are usually not seen until late May or early June, with the average for this time of year at about 80.

McGrath said the way things are going, the number will exceed last year’s and could approach some of the record highs depending on water temperatures and winds. In 2014, there were 1,546 icebergs in the shipping lanes, making it the sixth most severe season on record since 1900. There were 1,165 icebergs in 2015.

Chad Allen of the Shipping Federation of Canada said ships tend to move further south to avoid colliding with the icebergs, which increases costs and makes scheduling more challenging.

“A couple of years ago we had ships that would certainly extend several hundred miles off their track just to avoid those icebergs,” he said. “There’s a cost component to that, there are scheduling concerns and with the increased distances, there is more fuel being burned.”

McGrath said she has not heard of any ships striking an iceberg after heeding the patrol’s warnings, but a floating oil platform off Newfoundland had a close call last month with an iceberg the size of a small office building.

Husky Energy said the medium sized iceberg – described as 40 metres wide, 60 metres long and standing eight metres above the waterline – came within 180 metres of the rig, causing Husky to de-pressurize production wells and flush flowlines with treated seawater as crew mustered in preparation for a potential disconnect.

The ice patrol was formed after the Titanic disaster in 1912, and works with Canadian partners to track icebergs in North Atlantic shipping lanes.