This commercial line could get a lot more exciting soon

The Canadian marine insurance market could get a lot more interesting in the next year-and-a-half as major infrastructure projects get underway.

“There are more large infrastructure projects on the drawing board and it could be a very interesting 18 months for the Canadian market,” said Capt. Andrew Kinsey, senior marine risk consultant with specialist insurer Allianz Global Corporate & Specialty SE (AGCS). “From a project cargo standpoint, we are seeing quite a bit of activity in the Canadian market as well as more hull submissions that we are seeing with some of the changes in the London market.” (Lloyd’s recently suffered a variety of large marine insurance losses). 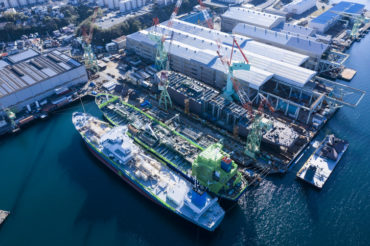 Capt. Kinsey said it’s too early to confirm what is in the works in Canada, “but there are some exciting new builds on the horizon. There’s a lot of talk both on the east coast and the west coast.”

Canadian marine exposures are both on the project cargo side and on larger hull fleets, Capt. Kinsey said in an interview Monday, in advance of the release of AGCS’ Safety & Shipping Review 2019. Some of it is tied to the oilsands, and some is tied to new technology adding interest to existing markets. For example, “gold operations in the Yukon, with new technologies that are looking to revisit some existing sites,” he said. “It’s a mix of both new and existing projects.”

Lakes also continue to be an area of cargo movement that is adapting and changing. “We do have… vessels transiting through the Saint Lawrence and doing discharges in the lakes themselves to get them closer to the site – the works where the projects are going on.”

AGCS’ Safety & Shipping Review 2019, released Tuesday, found that global large shipping losses (over 100 gross tons) are now at their lowest level this century, having declined by over 50% year-on-year. In 2018, 46 total losses of vessels were reported around the shipping world, down from 98 losses one year earlier. This was driven by a significant decline in activity in the global loss hotspot of Southeast Asia and weather-related losses halving after quieter hurricane and typhoon seasons.

What is contributing to collision as a top loss trend? Is it human error or system failure? “As you being to look at these losses, it’s not often that you can point to a single root cause,” Capt. Kinsey said. It’s very easy for a large container vessel to “overwhelm” the existing infrastructure of a port in Halifax or Vancouver, for example. It’s also important to understand that just because an individual port might not be dealing with the largest vessels, doesn’t mean that those vessels and their operations can’t impact that location, Capt. Kinsey added.

One challenge for some shipping operations is what’s known as the near littoral – “that area where you are finishing your ocean transit and you’re coming up on shore, preparing to arrive in port,” Capt. Kinsey said. “You’re entering the traffic separation schemes. You’re starting to encounter fishing vessels. You start to encounter tug and barges and coastal traffic.”

AGCS found the cost of claims was US$1.5 billion from ship sinking/collision incidents over a five-year period, with more than US$1 billion in claims from machinery damage incidents. This is based on more than 230,000 marine insurance industry claims from AGCS with a value of approximately US$10 billion (between July 2013 and July 2018).