Back to business results expected from oilsands as wildfire impact dissipates

CALGARY – Oilsands producers are expected to report back-to-business third-quarter results over the next few days as they shrug off lingering impacts of last May’s devastating wildfires in Fort McMurray, Alta. 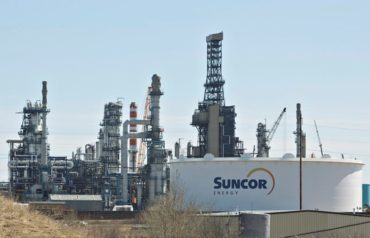 While provincial estimates report that Alberta oilsands production dropped by about one million barrels per day in May and by about 700,000 bpd in June, financial analysts say the industry’s main players were producing normal volumes in the three-month period that followed.

Calgary-based Suncor Energy (TSX:SU) oilsands production dropped to 178,000 barrels per day in the second quarter and it reported a $735-million loss as it shut down production from both mining and steam-injected well operations. Financial analysts expect it to report late Wednesday that oilsands output had been restored to over 440,000 bpd in the quarter ended Sept. 30.

Suncor owns 54 per cent of the Syncrude Canada consortium. Its oilsands mining and upgrading operations were shut down due to a fire-related evacuation, although its facilities suffered no damage.

“We expect Syncrude ran like gangbusters this quarter and estimate utilization at 91 per cent for production of about 171,200 bpd (net to Suncor),” said CIBC analyst Arthur Grayfer in a report to investors.

Syncrude’s strong production is also expected to boost results at Calgary-based Imperial Oil (TSX:IMO), which owns 25 per cent of the consortium. Imperial is set to report on Friday.

The senior oil company reported a $181-million loss in the second quarter and estimated the wildfires reduced its production by an average of 60,000 bpd. Analysts expect the third-quarter recovery in production will be tempered by a maintenance shutdown at its Kearl oilsands mining operations.

Calgary oilsands analyst Michael Dunn of GMP FirstEnergy said in a report he will be watching for hints of potential deals between Imperial and Calgary-based Cenovus Energy (TSX:CVE) when the latter reports on Thursday morning.

Dunn said Cenovus may be working with American refining partner Phillips 66 to bid on a Billings, Mont., refinery owned by Imperial’s parent company, U.S.-based ExxonMobil. He speculated Imperial may be interested in buying undeveloped oilsands leases from Cenovus to build projects using its solvent-aided steam technology to produce oilsands through wells.

“All said, we think there are two separate, but not entirely unrelated, reasons for Exxon and Cenovus to be having discussions, and so it is likely that discussions are ongoing,” he said, adding he thinks it’s unlikely that Imperial would consider a corporate takeover of Cenovus.

RBC analyst Greg Pardy said in a note to investors he will be looking for updates from Suncor on its target to sell between $1 billion and $1.5 billion of assets by mid-2017.

It has announced it would sell a 49 per cent stake in a storage tank farm at its under-construction Fort Hills oilsands mining project to two First Nations groups for about $500 million.

It also launched a sales process for its lubricants business last summer with results expected by year-end. Analysts say Suncor may also try to sell wind project stakes in Ontario and note speculation it could look at selling its Petro-Canada retail fuel business.

Husky Energy (TSX:HSE) reports its third-quarter results on Thursday morning and is expected to update output from its 60,000-bpd capacity Sunrise oilsands project. The newly constructed project was ramping up production in May when it was forced to shut down due to lack of access to pipelines closed as a precaution because of the fires.