Ratings firm A.M. Best Company continues to maintain a stable outlook for the Canadian property and casualty insurance industry, noting that it has “historically shown resilience and the ability to adapt when necessary.” 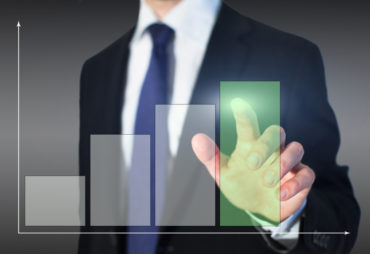 “The Canadian P/C industry continues to face challenges from weather, fire (such as the Fort McMurray Fire in May 2016), and potential seismic events, as well as market and economic pressures,” noted the report, titled Canadian Review/Preview – 2016: A Return to Sustainable Growth? and released on Tuesday. “In addition, ongoing uncertainty in several lines of business also provides further challenges. However, the Canadian P/C industry has historically shown resilience and the ability to adapt when necessary.”

The stability of the Canadian P&C marketplace is the result of continuing strong risk-adjusted capitalization and favourable underwriting and operating earnings, which is reflected in the lack of any rating changes in 2015, the report said. Whereas rating affirmations accounted for approximately 80% of total rating actions from 2012 through 2014, affirmations accounted for all but two of the rating actions in 2015. As well, for the sixth consecutive year, A.M. Best did not downgrade a single Canadian P&C company in 2015, excluding Canadian Branches (CABs), the report said.

“Rating pressures are not evidenced at this time by overall market conditions, even following the impact of the Fort McMurray fire, the results of which did not lead to any specific rating actions,” the report said. 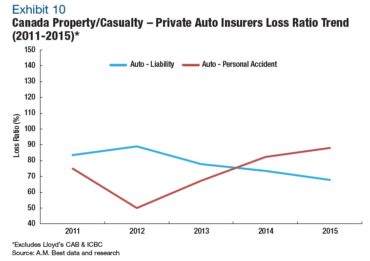 The Canadian P&C industry’s financial results were strong once again in 2015, as a surge in underwriting profitability largely offset a decline in investment and other income, A.M. Best reported. Pre-tax operating income totaled $4.7 billion, slightly less than the prior year ($4.8 billion). Net income improved by nearly $400 million in 2015 to $4.7 billion.

The report said that underwriting results benefited from a very mild catastrophe year in 2015. According to Property Claim Services’ (PCS) full-year cat review, 2015 was the quietest Canadian catastrophe year since at least 2010. Only three catastrophe events were noted based on PCS criteria, with total insured losses of approximately $500 million, down from five events with losses of $860 million in 2014. Alberta and Saskatchewan were the only provinces impacted by cat events in 2015. Alberta in particular has been hardest hit by wind and hail events in recent years, and was once again severely impacted by the Fort McMurray fire in May.

“As most Canadian P/C writers rated by A.M. Best maintain geographic spread at least through multiple provinces, they have been able to absorb these concentrated events without large impacts to their balance sheets,” the report added.

With the benefit of the quiet cat year, the overall combined ratio improved by 2.9 points in 2015 to 95.6%. Better loss ratios drove this result as the expense ratio ticked up by over a half point, which followed a similar increase from 2013. The steady increase in the expense ratio is partially reflective of continued investments in more sophisticated policy administration and claims systems, and continued efforts to leverage data analytics in underwriting processes, A.M. Best reported.

From a top line perspective, the Canadian P&C industry’s premium base grew by 3.6% on a direct basis but contracted by 1.1% on a net basis in 2015 over prior year. Slight to moderate growth among most lines was mostly offset by a significant decline in Auto Personal Accident premium of nearly 5% from prior year. Auto reforms as implemented by The Automobile Insurance Rate Stabilization Act and associated premium reductions continue to evolve. Growth among other lines was driven mostly by rate and other underwriting initiatives in efforts to improve risk management and reduce losses, the report said. 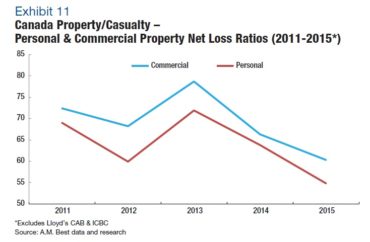 By segment, total auto net premiums written (NPW) declined by approximately 4.2% in 2015, following slight increases in each of the prior two years. This deterioration was comprised of a 13.3% decline in Auto Personal Accident, 2.7% decline in other Auto and a 1.5% contraction in Auto Liability. The decline in premium is primarily the result of the continued implementation of The Automobile Insurance Rate Stabilization Act from 2013 in Ontario, the report said.

The Auto Liability line showed marked improvement in 2015 as the associated loss ratio declined by nearly seven points. This improvement was offset by some deterioration in the performance of the Auto Personal Accident line, whose loss ratios increased by nearly six points. “The Auto Personal Accident line results are of particular concern, as the loss ratio rose for the third consecutive year, with some impact by the decline in premium in that line over the same time. Concerns with distracted driving and increasing repair costs are often cited as factors driving the increasing frequency and severity in losses in the auto lines,” the report said.

For property, overall milder weather patterns resulting in minimal catastrophic weather events were influential in improved underwriting performance in the property lines in 2015. The Personal Property line saw an improvement of nine points on the loss & LAE ratio, and the Commercial Property line saw an improvement of six points from the prior year. “These improvements follow similar improvements in 2014, showing the continuing positive impact of improved risk management efforts and other underwriting actions around rates, limits, and deductibles.”