Q2 catastrophe losses up 50.6% for Travelers after hail, wildfires

The Travelers Companies Inc. reported Thursday its combined ratio deteriorated 2.3 points, it renewed July 1 a property catastrophe reinsurance contract for Canada covering losses between $200 and $600 million (plus 50% of losses over $100 million), and that it paid US$524 million towards settling asbestos-related litigation under policies issued to an American manufacturer of thermal insulation products. 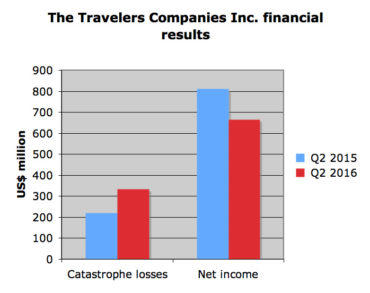 During the three months ending June 30, catastrophe losses “primarily resulted from wind and hail storms in several regions of the United States and wildfires in Canada,” Travelers added.

Travelers has offices in Canada and previously acquired The Dominion of Canada General Insurance Company.

Another treaty renewed July 1 was one covering “up to $800 million part of $850 million of coverage, subject to a $2.25 billion retention, for certain losses arising from hurricanes, tornados, hail storms, earthquakes and winter storm or freeze losses from Virginia to Maine for the period July 1, 2016 through and including June 30, 2017,” Travelers reported. “Losses from a covered event (occurring over several days) anywhere in the United States, Canada, the Caribbean and Mexico and waters contiguous thereto may be used to satisfy the retention.”

When Travelers released its Q1 financials in April, the firm suggested at the time that a plan of reorganization – proposed as part of the bankruptcy proceeding of Pittsburgh Corning Corp. – will “become effective.”

Travelers said Thursday that an amended plan “became effective” April 27. The firm reported July 21 that Travelers’ payments, in the second quarter of 2016, “totaled $524 million, of which $518 million was related to asbestos reserves.”

Pittsburgh Corning is 50% owned by Corning Inc. and 50% owned by PPG Industries, whose products include industrial coatings, glass, epoxy and titanium dioxide.

“For many years, PPG has been a defendant in lawsuits involving claims alleging personal injury from exposure to asbestos,” PPG stated in its annual report for 2015. “Most of PPG’s potential exposure relates to allegations by plaintiffs that PPG should be liable for injuries involving asbestos-containing thermal insulation products, known as Unibestos, manufactured and distributed by Pittsburgh Corning Corporation.”

Pittsburgh Corning filed a voluntary petition for bankruptcy in April, 2000 because that was “the only remaining legal process available to reasonably resolve its asbestos liability claims,” the firm stated earlier. Its reorganization plan includes a $3 billion trust to pay asbestos personal injury claimants, the LexisNexis news service reprted earlier, adding that in 2000, Pittsburgh Corning was “facing more than 200,000 asbestos personal injury claims.”

Travelers and 30 other insurers reached an agreement in principle, with PPG, in 2009, to settle asbestos-related coverage litigation under insurance policies issued to PPG, Travelers stated in its Q1 2016 filing.