The role of urban centres as economic powerhouses has never been more apparent. A 2011 report from McKinsey & Company notes 600 cities are projected to generate more than 60% of global growth to 2025. Not only are populations more urban, but they are interconnected, fuelling the efficiencies of today’s truly global economy.

This interconnectivity, though, comes at a price, as it ratchets up vulnerability to systemic shocks with far-reaching effects. For example, the digital networks that seamlessly connect organizations with their clients and vendors across the globe can be exploited by hackers with malicious intent. This, in turn, can have an impact on everything from infrastructure to supply chains and sales revenues.

The important role that cities play as the principal drivers of economic growth demands concerted attention be paid to the disruptive threats that may jeopardize their progress.

WHAT IS AT STAKE?

The Lloyd’s City Risk Index 2015-2025 analyzes the exposure of 301 leading cities around the world to 18 threats, calculating the economic output at risk over a 10-year period. Based on original research by the Cambridge Centre for Risk Studies at the University of Cambridge Judge Business School, the index shows how governments, businesses and communities are highly exposed to systemic and catastrophic shocks. 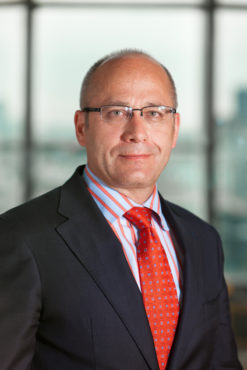 Investing in greater resilience – from better infrastructure to increased insurance protection – represents the first step in addressing these vulnerabilities.

The index found potential losses from man-made and natural threats for 35 major cities in North America over the next decade could total US$616.95 billion. The greatest threat for cities in the United States and Canada is a market crash (US$170.32 billion), followed by oil price shock (US$96.24 billion), cyber attack (US$93.34 billion), flood (US$76.82 billion) and human pandemic (US$56.51 billion).

While, historically, the focus has been on natural catastrophes, as evidenced by the greatest vulnerability – market crash – the findings underscore the increasing significance of man-made risks. Globally, all man-made threats together in the study are associated with almost half of total gross domestic product (GDP) at risk.

Despite the fact that man-made risks are an increasing concern, emerging threats are also having a growing impact. Cyber attack, human pandemic, plant epidemic and solar storm represent nearly a quarter of total GDP at risk globally.

Trends aside, the findings are clear: the resiliency of cities is at stake.

Given that Canada is one of the world’s most stable, wealthy and resource-rich countries with little risk of sovereign default, one might not give much thought to the resilience of Canadian cities. However, that does not mean significant man-made and natural threats do not exist.

The index analyzed six Canadian cities, namely Calgary, Edmonton, Montreal, Ottawa, Toronto and Vancouver. It calculated that with US$44.78 billion in GDP at risk, Toronto led Canadian cities with the most GDP exposed at US$15.76 billion while Ottawa ranked last on that list with only US$2.07 billion.

In line with the global findings, market crash represented the greatest threat to economic output, with more than a third of GDP at risk for the Canadian cities.

Cyber attack was the second greatest threat for all Canadian cities, but Calgary saw flood ranked immediately behind market crash in terms of severity.

Historically, media, financial and retail institutions have been most vulnerable in terms of cyber exposure given the volume and sensitivity of data they hold. However, the advent of physical damage created by compromised industrial control systems has made cyber exposure a priority for the manufacturing, industrial and energy sectors.

The skew toward man-made risk in Canada stands in bold contrast to emerging economies that bear an increasing proportion of risk-related financial loss as a result of their accelerating economic growth.

Major cities in emerging economies are often highly exposed to single natural catastrophes. For example, earthquake represents more than 50% of both Lima’s and Tehran’s total GDP at risk.

Human pandemic ranked in the top five threats for the six Canadian cities, with more than 10% of GDP at risk should an infectious disease disrupt local consumption and supply chains.

Looking back, the SARS epidemic that arrived in Hong Kong in 2003 had a serious economic impact, the most significant on demand. Local consumption and the export of tourism-related services were severely impacted.

More recently, the Ebola outbreak in 2014 served as another reminder of the need for established disaster-related financing mechanisms.

Insurance plays a crucial role in terms of solutions, with a number of different types of coverage coming into play as it relates to pandemics, including, but not limited to, the following: health insurance, travel insurance, workers’ compensation, employers’ liability, directors’ and officers’ liability, medical errors and omissions, medical malpractice, business interruption and contingent business interruption, event cancellation and contingency cover.

Taking a closer look at Toronto, the city’s economic profile is strongly weighted toward man-made threats, which represent more than 60% of the city’s total GDP at risk. Notable man-made threats for Toronto include market crash, cyber attack, nuclear accident and power outage.

As a financial hub, the Toronto Stock Exchange (TSX) is particularly attractive for mining stocks. In 2014, mining companies raised $8.9 billion on the TSX, more than twice the amount raised on the next biggest market, the Australian Securities Exchange (ASX).

The highly cyclical nature of the commodities markets means that when commodities prices are low, there is a residual effect on the amount of money that mining companies can raise, creating a vulnerability for the Toronto market.

Of course, the focus on man-made threats does not mean that natural threats are absent.

While man-made threats are increasing in significance, the geography of Canadian cities is neither changing nor is the need for rapid access to capital following natural catastrophes, ultimately underscoring the continued importance of the insurance industry in returning the economy to growth.

The insurance industry also plays a critical role in understanding the changing nature of natural threats, with certain extreme weather events linked to climate change increasing in both severity and frequency.

Recent events such as the 2013 southern Alberta floods and the Fort McMurray wildfire serve as stark reminders that natural disasters remain a significant threat to the resilience of cities in Canada.

Building resilience starts long before a catastrophe. In today’s increasingly interconnected global economy, all stakeholders have to pay more attention to the risks threatening economic engines.

There is a need to develop a deep understanding of the impact of severe events in order to develop appropriate risk-transfer solutions for growing perils, including cyber attacks and terrorism.

Insurance has a key role to play in helping to mitigate the high cost of these risks when they do occur.

Lloyd’s research shows that a 1% rise in insurance penetration translates into a 13% reduction in uninsured losses, representing a 22% reduction in taxpayers’ contribution following a disaster.

Insurance claims payouts are a key source of capital injection following a catastrophe and aid in the recovery and reduction of the economic costs to governments, business and communities.

But insurance is just one piece of the puzzle. Half of total GDP at risk can be protected by improving all aspects of infrastructure and crisis management in cities, underscoring the critical role of governments and businesses.

No municipality or insurer can act alone. Resilience is the collective responsibility of all sectors of society, and concerted efforts are needed to address the critical threats facing cities.