The Insurance Brokers Association of Canada (IBAC) contends that flood insurance should be affordable to all Canadians who need it, but coverage is either not available or “preventatively high” for about one in 30 homes, Swiss Re reports.

While Britain and the United States have subsidy programs, the Canadian government has not specifically committed to providing a similar subsidy.

“Public Safety Canada continues to work with key stakeholders, including provinces and territories and the Insurance Bureau of Canada (IBC), to explore options for a national approach to facilitate the entry of the insurance industry into the residential flood insurance market,” a federal government spokesperson writes in an email to Canadian Underwriter. “Among other initiatives, federal, provincial and territorial governments are currently working to leverage national flood mapping and risk assessments to inform decision-making, and to determine how to better promote public education and flood risk mitigation.” 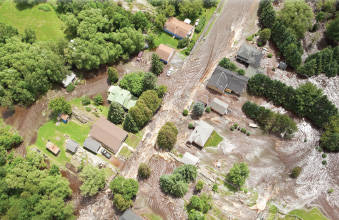 Overland flood insurance for residential properties was generally unavailable in Canada until 2015. Before 2013, Canada’s most expensive natural disaster, by insured losses, had been the ice storm in 1998 that affected Quebec and eastern Ontario.

Then in June 2013, southern Alberta was affected by floods that inundated downtown Calgary and resulted in the evacuation of several communities, including High River. Total economic losses were approximately $6 billion, but the insured loss was about $1.7 billion, mainly from sewer back-up, Bill Adams, IBC’s vice president, western and Pacific, reported earlier.

Less than a month after the Alberta floods, two separate storm cells hit the Toronto area. While the normal rainfall for the entire month of July is less than 75 millimetres, Toronto International Airport got 126 millimetres on July 8, 2013. Insured losses were about $1 billion.

IBAC later formed a task force to study overland flood and water damage. “We learned about flood insurance in other countries,” then IBAC president Lorne Perry said in October 2015 at the annual members meeting of the Insurance Brokers Association of Ontario, where he was a guest speaker. “We learned that flood maps in Canada need to be greatly improved,” Perry noted.

The task force completed a flood principles document, which IBAC provided to Canadian Underwriter in December 2016.

Personal flood insurance should be “available to Canadians who need insurance,” and “must be affordable,” IBAC states in its flood principles document. “There must be a partnership of the public and private sectors that is clearly understood by all.”

IBAC suggests that while government “should not be an insurer of first resort,” government should be available to provide a “backstop to catastrophes.”

In Canada, water protection coverage has “now become prevalent with the vast majority of nationwide insurers in various phases of roll-out across the country,” Willis Re, Willis Towers Watson plc’s reinsurance intermediary, notes in its 1st View report, released January 3.

“Fortunately, various Canadian insurance companies are working to offer more comprehensive flood coverage, which contributes to reducing the flood protection gap,” Balz Grollimund, head of underwriting for Canada and the English Caribbean at Swiss Re, reports in a statement. “However, flood insurance continues to remain either not available or unaffordable for Canadian property owners in areas with high flood exposure,” Grollimund continues.

Maz Moini, vice president of commercial lines and reinsurance at Aviva Canada, told Canadian Underwriter earlier that with some properties, the “actuarially sound premium” could exceed $10,000 a year.

An assessment by Swiss Re found that “9% of Canadian homes are located in a 100-year flood zone and can be considered at risk for severe flooding,” notes Grollimund. “For these homes, and especially the ones located within the 10- to 50-year flood zone, which affects 3% of all homes, flood insurance is either not available or the premium is preventively high,” he adds.

In its 2014-2015 budget, tabled about three years ago by then-Conservative finance minister Jim Flaherty, the federal government announced it “proposes to consult with the insurance industry, provinces and territories to explore options for a national approach to residential flood insurance.”

IBC is “advocating for a public-private partnership that would see more of the water risks in Canada taken on by the private sector, but for government to formalize its role in providing both support to get people out of harm’s way – to prevent them from building in floodplains – and to ensure those who are at highest risk would also continue to have some type of insurance coverage,” Adams reported earlier.

In 2015, Don Forgeron, president and chief executive officer of IBC, said new residential flood products in the Canadian market “will likely not deal with all of the high-risk properties” and suggested “government involvement” is likely needed to cover those high-risk properties.

Forgeron made his comments in 2015 during the National Insurance Conference of Canada (NICC).

How government involvement in flood insurance would work in Canada is “one of the key public-private discussions that we are going to need to engage in the immediate future,” Craig Stewart, IBC’s vice president of federal affairs, suggested in early 2016 during CatIQ’s Canadian Catastrophe Conference in Toronto.

“There will be those who find themselves in homes that are flooded over and over and over again, and they are going to be the ones that will have difficulty getting insurance,” Stewart said. “So a robust solution that’s going to work for all Canadians – when will that be available? That will depend on societal decisions with governments on how we are going to roll out to make sure that those Canadians aren’t left behind.”

A “good example of how flood insurance can be made available to everybody” can be seen with Flood Re in the United Kingdom, Grollimund contends.

Flood Re, a special purpose vehicle and a not-for-profit monoline reinsurer, was launched in April 2016. It is subsidized by a tax levied on all insurers offering home insurance in the U.K. – a combined total of 180 million pounds to the industry. Each insurer is charged based on market share.

“The premium we charge insurers is below the rates insurers would normally charge on properties at the highest risk of flooding,” Flood Re reports.

This way, there is a cross-subsidy from about 98% of the U.K. population to high-risk property owners, Brendan McCafferty, then Flood Re’s chief executive officer, reported at the 2015 NICC.

Flood Re estimates that, “over time, around 350,000 households could benefit” from the program.

Forgeron suggests “there is no single correct answer, and certainly no flood insurance model elsewhere in the world that can serve as an off-the shelf solution for us here in Canada.”

IBC was taking the approach of studying “what is in place elsewhere,” and to “identify best practices that could be applied,” he said at the 2015 NICC.

“The big variable for us is the role that government can play,” he said. “Do they run the program, as they do in some jurisdictions? Or do they simply enable it by fostering the conditions necessary to make sure flood insurance is available? Or is it somewhere in between?”

The United States government created its National Flood Insurance Program (NFIP) “in 1968 to provide flood coverage to consumers who were unable to get coverage from the very limited private market,” Emanuel Cleaver, a member of the United States House of Representatives, said at a hearing in January 2016 of the House financial services committee’s subcommittee on insurance.

At the time, the subcommittee was studying the Flood Insurance Market Parity and Modernization Act, passed last year by the House, but not by the Senate.

That bill, if passed into law, would “allow private insurers to come into the flood insurance market, creating competition and choice in policies,” stated Dennis Ross, the Republican congressman who sponsored the bill.

Speaking against the bill was Birny Birnbaum, executive director of the Center for Economic Justice, a Texas-based organization that advocates for availability and affordability of insurance.

“There is no insurance mechanism – public, private or combo – that will be able to finance increasingly frequent and severe flooding, and a focus on resiliency and sustainability means federal expenditures as investments today, to replace disaster relief expenditures tomorrow,” Birnbaum argued before the subcommittee.

NFIP “was set up to be self-funded and to repay its borrowing with interest,” Standard & Poor’s Financial Services LLC notes in a report released this past June. “But that’s exceedingly difficult given that it doesn’t charge actuarial rates and, therefore, relies on the Treasury as a backstop.”

NFIP is “now indebted to the U.S. Treasury to the tune of (US)$23 billion, most of which it borrowed after Hurricane Katrina,” S&P adds in the report, Privatizing U.S. Flood Insurance: A Trickle-Down Effect, Or Opening Floodgates?

NFIP also had to pay out US$8 billion in 2012 after Hurricane Sandy, which was downgraded to tropical storm status before it made landfall about 200 kilometres south of New York City.

NFIP policies cover building and/or contents, including the foundation, the electrical and plumbing system as well as central air conditioning, furnaces and water heaters, the U.S. Federal Emergency Management Agency (FEMA) reports on its website.

A property cannot qualify for NFIP unless it is in a community that has joined NFIP and agrees to enforce certain floodplain management standards.

In Canada, “there must be a common standard for flood mapping that will be used across the country,” IBAC states in its flood principles document.

IBC reported in 2016 that it had “received the results” of flood hazard maps and property-level exposure data developed by a group led by RELX Group plc’s LexisNexis Risk Solutions unit.

“Essentially, what it does is the company took river gauge and rainfall data to measure flood extent and depth, flood defence information, historical flood records, snowmelt and terrain data,” Stewart said in 2016 during the panel discussion, Floods: Where do we Stand and What’s Next?, at the Canadian Catastrophe Conference.

A co-panelist was Kurt Kornelsen, network manager for FloodNet, a network of researchers. Some models used to forecast future weather patterns give a “range of possible outcomes,” Kornelsen said at the time, telling attendees that one of the problems is municipal engineers need to “make a single decision” when planning for future flood frequency.

In 2006, the City of Toronto approved the Basement Flooding Protection Program, which includes construction of surface storage ponds and upgrades to storm and sanitary sewers.

About $1.527 billion has been allocated to the city’s 2017-2026 capital plan for “projects in 67 chronic basement flooding areas across the city,” notes an October 2016 report from Toronto Water.

As part of that program, the city’s service standard requires storm drainage systems to accommodate one-in-100-year storm events – up from the one-in-two- to one-in-five-year frequency events. The program was one response to a 2005 summer storm that Property and Casualty Insurance Compensation Corporation previously reported gave rise to almost $600 million in insured losses.

In a report released in 2013, city staff identified issues that can lead to basement flooding.

“Mitigation education is paramount for the entire sector to advance at every possible opportunity,” IBAC maintains in its flood principles document.