Fires originating from containers within cargo ships are rare, but when they do happen, they can cost insurers tens of millions of dollars, marine insurance experts caution. Since hazardous or dangerous goods are a common cause of fires that do take place, there is a movement afoot to ensure shippers follow the International Maritime Dangerous Goods Code.

The extent of damage from a fire within a container on a container ship, at sea, “really depends on the commodity being subjected to the fire, the reach of the fire, and most importantly, if the salvors are able to reach the ship and able to contain the fire,” explains Isabelle Therrien, vice president at Lloyd’s managing general agent Falvey Cargo Underwriting. 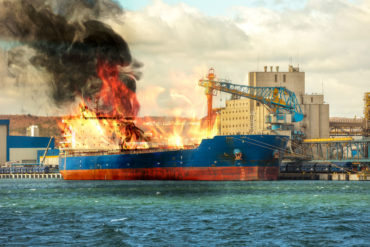 “If it happens at a shipyard, where the ship is in dry dock and maintenance or repair work is being conducted, it is obviously easier to contain a fire than if the vessel is the middle of the ocean, as more firefighting equipment is readily available,” says Therrien, who is also president of the Canadian Board of Marine Underwriters (CBMU).

Two fires over the past year “have fuelled concerns” from the International Union of Marine Insurance (IUMI). One fire was aboard NNCI Arauco this past September in Hamburg, Germany; four months earlier, a fire was caused by welding operations on the Maersk Karachi, notes a recent statement from IUMI.

“At sea, below-deck fires cannot be fought with water and so (carbon dioxide, CO2) is used instead to displace the oxygen and extinguish the fire,” Uwe-Peter Schieder, vice chairman of IUMI’s loss prevention committee, says in the statement. “However, if the fire is burning within a container, the box will protect it from the CO2 and so this method of firefighting is rarely successful.”

Using CO2 to contain a fire “is only good if there is a contained space,” and that is normally below the deck, suggests Mike Wills, president of Eagle Underwriting Group Inc. and past CBMU president. “Anything above that would usually be fought by water.”

Below deck, firefighting crews “have some added trouble in getting to the cargo,” Wills reports. “You may need to dump a number of containers overboard to get to the container that’s on fire before it spreads,” he advises.

“Typically, hazardous material exacerbates the problem, but usually the requirement is for them to be shipped on deck,” he explain.

One container ship fire occurred in August 2015 on the Caroline Maersk, a Danish ship built in 2000.

The firefighting equipment on board included tools that allowed fire crews to breach the containers, notes a report this past April from the Danish Maritime Accident Investigation Board. That equipment included, among other things, one spear for water, two spears for CO2, one hammer and one cup drill.

“The contents of the container in which the fire originated were identified as charcoal for water pipes,” the board reports. “An independent, third-party investigation indicated that self-heating of the charcoal tablets was most likely the direct cause of the fire.”

In its report, the board points out that charcoal can react with oxygen in the air to produce heat, and if the heat is retained, the product can become hot enough to ignite.

Carbon pellets were the source of another container ship fire in 2001 off the coast of Nova Scotia. The Transportation Safety Board of Canada reports that on March 22, a fire broke out in a container on the Japanese cargo ship Kitano, which was en route from New York to Halifax.

One of the containers had activated carbon pellets, which are used for, among other things, desulphurization of gases and removal of acidic contaminants, the TSB investigation report states.

Although the vessel suffered only some superficial damage to the coating on the hatch cover in the way of the containers, containers had to be removed. “All but one suffered varying degrees of fire, smoke and water damage,” the report points out.

A container with 14 115-kilogram drums and 288 44-kilogram open mesh bags of activated carbon pellets impregnated with potassium hydroxide (caustic potash) was jettisoned, but TSB notes that the source of ignition could not be determined.

But some ships today have a capacity of almost 20,000 TEUs, Therrien says.

“As we get bigger ships, we will get larger losses,” Wills says. “The potential of fire at sea is one of the most terrifying things that can happen on board.”

“A fire on a container ship will definitely hit the marine insurance side of things, whether it is on the cargo side because there is cargo that is going to be damaged, the vessel owner side because the hull will be damaged or the P&I side for any harm the fire might have caused to the crew,” Therrien says. “There are all sorts of different insurance implications to a fire at sea.”

Other than that, though, “your cargo policy or your ship policy would cover pretty much any loss that’s out there.”

The issue with container fires, “more often than not,” is with dangerous or hazardous cargo, Desouza suggests.

“If the cargo is not properly packed or if non-compatible cargoes are stored in the same container, they can react during transit if the packages move about and spill over during rough seas,” he goes on to say.

As an example, if dangerous cargo that is susceptible to self-heating or spontaneous combustion is stowed close to the engine room, bulkhead or on deck during the summer when it is hot and the sun is shining, “the temperature inside the container can get upward of 40 degrees (Celsius) and that source of heat could cause the cargo to react,” Therrien points out.

“The real wild card is, how are shippers declaring the cargo?” she notes. “A lot of times, you will see fires at sea because of misdeclared cargo.”

Freight forwarders and consolidation warehouses are often “not fully aware of the nature of the cargoes” inside containers, Desouza says. The International Maritime Dangerous Goods (IMDG) codes include classifications for hazardous cargoes – such as explosives, toxic or corrosive – and “require that the packages are properly labelled according to their dangerous goods class/type,” he reports. “Proper packaging, labelling of the cargo and adequate securing are key to ensure safe carriage.”

Modern vessels “have better fire suppression systems and arrangements, but that can only do so much if the cargo is not declared properly,” Therrien warns.

“There is certainly a movement in the industry to ensure that all of the cargo is declared properly. It will happen at times that it is misdeclared and not shipped according to IMDG codes,” she adds.