Do you remember gathering around the TV in 1983 to watch the world premiere of Michael Jackson’s Thriller?

Media have certainly changed since then. More than three decades after Jackson thrilled us, Facebook, Twitter, Instagram, and YouTube now command our attention. Today, we gather around our phones to engage with “social media influencers.” These modern-day celebrities have a substantial online following and are engaged by companies to promote a brand or product online (typically through video or written content).

Insurance is keeping pace with the changing media landscape. “The coverage itself has been expanded from publishers’ E&O,” says Meghan Argier, an underwriter specializing in media and entertainment with Beazley Canada. 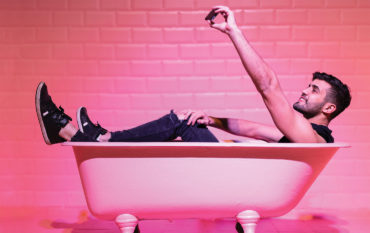 “It’s interesting to track how the diffusion of content has changed from traditional means of publishing such as newspapers, magazines and books. You saw that shift to online posting, whether it’s blogging or vlogging [blogs where the medium is video], and now it’s the actual monetizing of that through social media influencers. It’s still very new, but at its heart, they’re still content creators and publishers of content.”

“We’re seeing more of these individuals, who are celebrities only because of their online presence and following — people engaged by companies to advertise. Influencers aren’t just doing brand and product promotion: They are able to influence because they’ve created their following from their own content.”
Like any other content creators, social media influencers may find themselves in hot water legally from time to time. Influencers are exposed to media liability perils such as:
Defamation. An influencer may make defamatory comments against individuals or specific product makers, for example.
Breach of contract. An influencer may not be able to carry out the services for which they were employed, resulting in financial loss for the other party.
Intellectual property infringement. In one recent example, a popular Russian YouTuber known for his film reviews said in a video (viewed more than 3-million times) that he was being sued for copyright infringement for “using too many clips” in his reviews.
And what if influencers use comparative advertising in the posts they have been engaged to create? “They could be exposed for failure to obtain licences, clearances and consent for any third-party intellectual property featured in their content,” Argier says. “Often that will involve images. It could be music or film clips; basically, it could be any third-party intellectual property they are using to create this content.”
Insurance might cover all the content being created. Or it could carve out a specific policy that covers only the influencer’s contractual obligations to promote a brand or product for a single company.
“Right now we’re covering third-party actions brought against an influencer, or an action brought against the brand that is related to the influencer,” Argier says.
Sometimes influencers will have a contractual obligation to purchase insurance, which Argier thinks is ultimately going to drive interest in this class of business.
Insurers are encouraging a greater awareness of the need to cover influencers, especially considering the market’s global ad spend is expected to grow to US$10 billion by 2020. Currently, the biggest challenge is promoting the insurance product and making people aware of the need for such coverage.