A growing number of countries now recognize same-sex marriage and civil partnerships. The Canadian government amended the Human Rights Act in June 2017 to outlaw employment discrimination based on gender identity and expression.

As of 2018, 93% of Fortune 500 companies have non-discrimination policies in place that include sexual orientation. Eighty-five percent have non-discrimination policies that include gender identity. Many companies also provide other benefits (49% include domestic partner benefits and 62% include transgender-inclusive benefits).

So while substantial strides have been made in recognizing LGBTQ issues, more than 53% of LGBTQ workers hide their identity at the workplace. This identity struggle has detrimental effects on their health, happiness and productivity, as well as on business talent retention and leadership development. 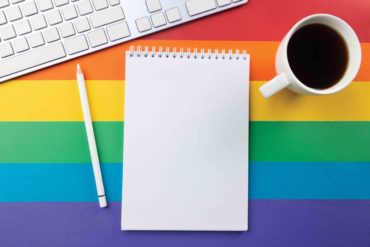 Straight colleagues frequently have a double-standard approach to LGBTQ issues in the workplace. A U.S. Human Rights Campaign Foundation report found that 81% of non-LGBTQ respondents indicated that their co-workers “should not have to hide their identity.” However, 70% of the same respondents indicated that talking about sexual orientation in the workplace is “unprofessional.”

LGBTQ professionals are looking for role models. A 2019 LinkedIn survey revealed that 70% of LGBTQ professionals believe they have no senior LGBTQ leaders to look up to. This affects whether people will identify as LGBTQ at work. Twenty-eight per cent of professionals who are currently closeted say they are concerned that colleagues will judge them if they come out. Research by Vodaphone and Out Now in the UK revealed that 83% of respondents would prefer to work for an employer that has visible LGBTQ leaders, friends, allies and supporters.

The insurance industry, often regarded as old-fashioned and conservative, has some great success stories to tell.

Inga Beale, the first female and openly bisexual CEO of Lloyds of London, was instrumental in the launch of Pride@Lloyds, an internal LGBTQ employee resource group. She has supported the LGBT Insurance Network and done much to change the culture at Lloyds.

AIG UK’s chief operating officer, Geoff Godwin, is the executive sponsor of the AIG’s UK LGBT Employee Network, which provides education and support for LGBTQ employees and allies. He is responsible for the company’s UK induction process, which includes two specific sessions on diversity and inclusion.

An organization with a diverse workforce can draw on the variety of talent and different perspectives employees bring to their jobs. It can improve the company’s adaptability, enhance its ability to provide services to diverse audiences, and inspire employees to think beyond their own experiences and push their boundaries.

Companies with inclusive, supportive environments have better reputations and branding. They draw better candidates for open positions and retain top talent longer. People who feel secure in their workplace, supported by policies that promote acceptance and positivity, will be more loyal, more focused on their jobs and less distracted and stressed. Ultimately, this means the organization will function better across the board, with greater efficiency and increased profits.

It’s a matter of RESPECT. Here’s how you can do it.

Targeted recruitment campaigns should be pursued, job advertisements should welcome LGBTQ applicants and recruiters should discuss diversity and inclusion at interviews. All new staff should be invited to inclusion and diversity networking talks.

LGBTQ and allies should be present in all levels of the organization, including top-tier management. Establish mentoring programs that match participants across genders, races, ages and sexual identities. To be effective, there must be “buy-in” from senior leaders on this initiative. Research by the Boston Consulting Group revealed that less than four in 10 LGBTQ employees consider their organization’s senior leadership team to be committed to diversity and inclusion.

Share information and news about LGBTQ issues on social media, the internet, ads and public displays. For example, pharmaceutical giant GSK adorned their UK headquarters with massive rainbow flags and organized several Pride-focused events at its London office. But beware: Some companies have no diversity and inclusion policies in place, thus making their support appear like tokenism.

Create a zero-tolerance harassment policy. Make it clear that employees will be disciplined or fired for wrong-doing. Encourage victims and those who have witnessed inappropriate behaviour to come forward and report it.

Hold discussions about diversity. Establish proactive diversity programs that involve the entire organization. They should include diversity and inclusion training and advocate for more inclusive language. Discuss with employees of various genders, sexualities and gender expressions about what would help them to feel more included.

a risk assessment to identify priorities for action and highlight strengths and weaknesses within the organization. Review the appropriateness and language of internal policies. Focus on explicitly including non-traditional families; creating an inclusive dress code that avoids gender stereotypes; and review internal communication for language and imagery that tacitly assumes heterosexual families and relationships as the “norm.”

Celebrate your successes. Whether it’s meeting goals or milestones, LGBTQ meetings that have taken place, or the promotion of LGBTQ business leaders, recognize such achievements.

Dr. Dexter Morse is director of industry risk management and insurance at the International Air Transport Association (IATA) in Montreal.