Media reports these days are filled with news of high-stakes pollution claims, emphasizing the importance of pollution insurance coverage.

Most recently, the Heiltsuk Nation in B.C. launched a civil lawsuit last month against the Federal Government of Canada, the B.C. provincial government and the U.S.-based Kirby Corporation over an incident two years ago, when a Kirby-operated tugboat and associated barge ran aground a reef near Bella Bella, B.C., spilling approximately 110,000 litres of diesel fuel into the water. The incident happened at 1 a.m. and the second mate had fallen asleep while on watch, according to a Transport Canada investigation into the matter.

In a financial filing with the Securities Exchange Commission (SEC), Kirby reported that it “has various insurance policies covering liabilities including pollution, property, marine and general liability and believes that it has satisfactory insurance coverage for the cost of cleanup and salvage operations as well as other potential liabilities arising from the incident.” 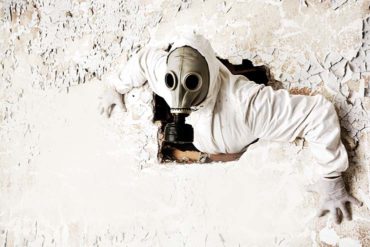 Unlike Kirby, however, not all Canadian companies have pollution coverage in place. The coverage is not required, and so many companies will go without, perhaps not realizing all the different pollution risks they face.

There’s dirt, mould, asbestos – even water. Chlorinated (tap) water spilling on your kitchen floor is nothing to fret about. But if that same chlorinated water spills into a river or lake, it’s now a pollutant that can cause severe damage not only to the environment, but also to the polluter’s coffers if they have no coverage.

“Anything could be considered a pollutant if it’s in the wrong place at the wrong time,” says Miles Foxworth, an environmental underwriter at Beazley.

Several environmental contaminants are associated with the construction industry. More than 1.4 million Canadians are employed in construction trades and professions, and these workers install, repair or renovate work worth $241 billion a year, according to BuildForce Canada. A boon to our economy, contract work includes hauling, installing and remediating potentially hazardous materials.

Consider asbestos. Canada officially banned products containing asbestos just this year. In other words, a three-year-old building could have pipes containing the deadly substance. The health effects are subject to numerous court claims in both Canada and the United States. According to a Government of Canada estimate, asbestos was responsible for roughly 1,900 cases of lung cancer cases and 430 cases of mesothelioma in 2011.

But asbestos is typically not covered under a standard-form commercial insurance policy, as observed by Brian Cane, a senior vice president of construction underwriting at ENCON Group. “A contractor doing a minor renovation project in a relatively new building could start cutting pipes,” says Cane. “Unbeknownst to the contractor, some of the materials they are cutting may contain asbestos and the asbestos spreads into the building’s ventilation system. The next thing you know, they have to shut down the building to clean the ventilation system. That type of loss would not typically be covered by a CGL [commercial general liability] policy because almost all CGL policies have asbestos exclusions.” It’s the same exclusion for mould, another common hazardous material you might run across in the construction industry.

In other words, carrying environmental insurance is emerging as a best practice. “In order to get a permit to develop, a lot of municipalities or cities are actually saying to contractors that they must buy environmental insurance to get the construction permit,” says Perry. “The requirement is made to the applicant, which is the project owner. The requirement is then pushed down from the project owner to the contractor to evidence insurance.”

However, while larger construction companies and contractors likely have the budget for this type of coverage, the smaller ones do not. The average Canadian construction company is small, according to BuildForce Canada. In the non-residential sector, almost 50% have five or fewer employees; in the residential sector, it’s nearly 70% of companies. “Small, family-owned or individual-owned businesses are really just trying to cut costs,” Foxworth says. “They want to buy the coverages they’re required to have. They don’t want to have to pay for things that may or may not happen.”

Perry agrees, particularly if a contractor is bidding for a project. “If your peers aren’t doing it, and now you have to budget [an environmental policy] into your cost, it may make your project uncompetitive – especially if the owner is not requiring this of you.”

Sometimes, smaller contractors may think their CGL policy – which protects a business against liability claims that result from bodily injury and property damage stemming from the company’s operations – will be enough to cover them in the event of an environmental accident. But that’s not necessarily true. “If you’re relying on a CGL policy for environmental coverage, well, virtually, every CGL policy has a pollution exclusion,” says Cane.

Contractors can get some environmental coverage under a CGL policy, in the form of a sudden accidental pollution endorsement, which attaches to the CGL policy. “The primary intent of that endorsement is to provide coverage for pollutants that a contractor brings to a job site,” Cane says. Still, “it’s a common misconception that this endorsement will provide [contractors] with plenty of coverage for most pollution incidents.” Adds Perry: “It’s an element of coverage that’s very useful for general liability risks, explosions, fires or something falls off a truck or a building. It’s there for that instant bang/boom injury.”

But that instant bang/boom is just that–instant. A time element is attached to sudden and accidental. For example, if a pollutant gets into soil, that pollutant must be detected within 120 hours of the start of the discharge. The pollution incident must also be reported to the insurer within 120 hours of being detected. (Some versions of the endorsement provide for 240 hours of reporting.) “Contractors should realize,” Cane says, “that most pollution losses occur over a period much longer that 120 or even 240 hours.”

So, what are contractors to do? According to Cane, almost all businesses – contractors, consultants, property owners, building owners – should consider purchasing environmental liability insurance as part of a comprehensive risk management program. “It’s sound risk management for any organization.”

George Boire, environmental practice leader with Marsh Canada, points out that environmental insurance is almost always discretionary in Canada. Whether the insurance is sound risk management, “the company itself, with the help of their broker/advisor, has to make an assessment on whether it thinks the exposure is broad enough to justify the cost.”

Oftentimes, contractors don’t think they have an exposure, simply because they’re not manufacturing or distributing hazardous chemicals, says Foxworth. “Anything that can be released can be a pollutant, even fresh water. People don’t think about that.”

Brokers can help educate clients think about their environmental risks. One way is through claims examples. “We have actual claims examples we can share with our brokers, and they can in turn share with their clients to help convince them they need the coverage,” says Cane.

Boire admits there is a challenge associated with clearly explaining to clients that they have an exposure — only to discover they don’t purchase the coverage. “In many cases, if they don’t have to buy it…they’re not going to,” he says. “Sometimes you’re not able to convince them. Then you have to move on and try again next year.”

Brooke Smith has been an editor with various publications over the past 10 years, including a managing editor of Benefits Canada.