Just a few days after wildfire forced the evacuation of Fort McMurray, one property and casualty insurance industry representative was permitted to enter the abandoned city; a week later, two more arrived. In total, two senior staff from Insurance Bureau of Canada (IBC) and an industry claims specialist retained by IBC were on the ground to see the first-hand results of the Alberta wildfire.

At the time, active firefighting was top priority; the provincial Regional Emergency Operations Centre (REOC) controlled the area with tight security at entry checkpoints. The air quality health index was above 10 (indicating very high risk), often reaching 30 and even as high as 50.

As the disaster was still unfolding, it was too early to begin assessing damage or planning for rebuilding. But the province had learned from its recent experiences with the Slave Lake fire and the floods in southern Alberta. 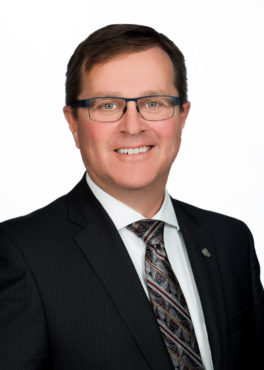 Embedding insurance industry representatives in the province’s emergency response earlier helped smooth the way for the 88,000 evacuees, many of whom would soon be making insurance claims. It also helped connect the industry with the community that it would help to rebuild.

In mid-May, AIR Worldwide issued an insured loss estimate of $4.4 billion to $9.0 billion. The estimate reflects insured physical damage to residential and commercial property, as well as direct business interruption losses (except those related to the oil industry). In early July, IBC reported that, based on figures from Catastrophe Indices and Quantification Inc., insured damage was projected at $3.58 billion

But it is not just the size of the loss that is unprecedented. The inclusion of the p&c insurance industry – having IBC act as the conduit between the government and the industry and its customers – in all aspects of the provincial emergency response is also unprecedented. This early industry participation is a first in disaster management in Canada and is likely to become a best practice for future responses.

It may be early days in the Fort McMurray recovery, but it is not too soon to begin assessing the results of this early collaboration between the insurance industry and government through the lens of the events of the first six weeks since the evacuation.

When the province declared a state of emergency, many p&c industry representatives invoked their emergency response plans and began mobilizing staff and resources. By May 5, 26 insurers were on the ground at Lac La Biche, Edmonton and Calgary evacuee centres to hand out cheques for additional living expenses (ALE) and answer questions.

Demand for insurance information skyrocketed, with the first questions

being, understandably, about ALE. Questions came not just from individual policyholders, but from the provincial government. For its own planning, the province needed to understand what kinds of support evacuees could expect.

The Alberta government began nightly telephone town halls on May 9, in which IBC took part to answer insurance-related questions. The town halls continued over three weeks, with a total of 17 sessions and more than 160,000 people calling in.

With 24-hour notice, IBC provided 40,000 fact sheets on insurance and the claims process to be included in the province’s packages of prepaid debit cards for evacuees.

Social media was a primary source of information for evacuees and the key platform for disseminating and cross-pollinating messages from government, the industry and consumers. The dedicated IBC Fort Mac Fire page received five times the typical number of daily visits in its first five days and thousands of tweets about the disaster mentioned insurance.

This week, industry representatives were invited to meet with the government recovery task force, including on the issue of adjuster access to the area.

Industry representatives were embedded in the REOC in Fort McMurray. Once there, they were invited to take part in the centre’s daily operations, including attending the four daily briefings along with representatives of services involved in the emergency response efforts.

Once on the ground, industry representatives were quickly pulled in to discussions and negotiations around adjuster access, disposal of fridges and freezers once residents returned, and access to hotels and business facilities for industry personnel.

And when Premier Rachel Notley announced a voluntary re-entry strategy, new questions arose about transitional housing. The government was keen to ensure that its decision to move from a mandatory evacuation to a voluntary re-entry did not adversely affect insurance coverage, so industry representatives provided information on a number of re-entry scenarios.

IBC also met with the Red Cross to share information and provide assistance while that organization worked on a strategy to help the most vulnerable evacuees.

In the countdown to the phased re-entry due to start June 1, air quality became a major issue for industry staff deployed to the area to prepare community infrastructure (such as grocery stores and pharmacies).

The Regional Municipality of Wood Buffalo (RMWB) approached IBC to request that the insurance industry take responsibility for collecting fridges and freezers. Insurers were hesitant at first but, after some discussion and number crunching, they realized that centralizing removal with one vendor would demonstrate the industry’s commitment to the community and save them time and money. By June 22, commissioned local contractors had picked up, degassed and disposed of 10,114 units.

This was an intense week when many overlapping issues required negotiations and solutions. It was also a week when the value of being embedded with the REOC team became abundantly clear.

On May 30, with a phased re-entry scheduled to begin in two days, Premier Notley announced the chief medical officer of health had deemed more than 560 homes not damaged by fire to be uninhabitable because of contamination, meaning 2,000 people would not be allowed to return home.

The provincial state of emergency was also extended for another 28 days.

The situation raised not only new insurance questions, but also questions about the health and safety of other areas of the city for both residents and responding insurance personnel. With more people unable to access their homes, there was expected to be more demand on the city’s rental space at a time when many industry people involved in the recovery were also trying to find accommodation.

Insurance industry representatives were running into issues with office space and use of temporary trailers, but later negotiated with RMWB and the REOC for space that would allow an insurance hub to be set up.

Also this week, RMWB agreed on May 28 to allow adjusters to enter the area ahead of residents on the condition that they not visit homes or sites without authorization from the insured. By May 29, 400 adjusters and claims staff had arrived.

However, the night before residents returned on June 1, the REOC circulated well-intentioned, but inaccurate, information directing returning residents to contact their respective insurance company “to assist you in determining if there are health issues affecting your home.”

The industry quickly engaged senior levels of government and the REOC to address the problem.

Within a couple of days, Alberta Health Services circulated new information announcing that public health inspectors would be performing inspections on specific homes to offer recommendations on remediation.

Industry representatives presented a co-ordinated strategy for demolition and debris removal, modelled on the Slave Lake process, to Fort McMurray’s city council, which was eventually accepted. Adjusters and other industry personnel then got access to fenced-off and restricted areas.

Several new issues arose, including the rights and responsibilities of landlords, tenants and insurers in determining when tenants could return to their homes. And the issue of rebuilding on the same site was raised during the last telephone town hall held on June 8, foreshadowing what is an ongoing discussion among the province, the municipality and the industry around same-site issues.

The transition began from emergency response to recovery and rebuilding. The provincial REOC disbanded and transferred responsibility back to the RMWB, although a provincial state of emergency was to remain in effect.

Even from this accounting of the first six weeks of disaster recovery, rebuilding Fort McMurray is clearly a marathon, not a sprint.

But collaboration to date bodes well for a strong race and a successful finish, first and foremost, for the residents of Fort McMurray and the region.