The Power of Now

These days, it is both highly fashionable, and extremely necessary, for insurance professionals to look into the future and discover new things that have clear potential to cause massive sea changes to the property and casualty insurance industry. Emerging issues include autonomous vehicles, fintech (including blockchain), cyber risk, the Internet of Things, artificial intelligence/machine learning, usage-based insurance, telematics (both vehicle and home), etc.

There is certainly no shortage of industry seminars on these emerging issues; such topics stir the imagination and prompt strategy-makers to begin thinking about how they will prepare for a brave new world — if they choose to do so at all.

Awareness of the future is certainly key, but equally important — if not more important — is the current state of the P&C insurance industry. Things happening now are most pressing, particularly chronic issues that have been nagging the industry for some time and solutions to which are not always immediately forthcoming. Both auto insurance and severe weather clearly fit into this category. 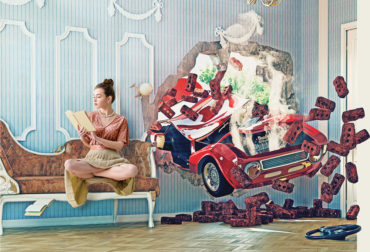 Before examining the impact on the results of auto and severe weather, let’s have a look at the existing state of the industry.

Industry results in 2018 worsened year-over-year “despite nearly 8% growth in DPW [direct premium written] and 9% in net earned premiums,” according to the MSA Quarterly Outlook Report 2018 Q4. Claims grew by more than 15%, resulting in a significant reduction in underwriting income. Investment income, too, was down heavily over 2017, resulting in an almost 20% reduction in net income and a significantly heavier loss in comprehensive income.

For Canada’s P&C industry, the net loss ratio deteriorated more than 3.5 points last year to 67.7%, while the industry’s combined ratio was up more than two points, according to MSA Research president and CEO Joel Baker. The investment yield dropped to just over 2% and return on equity was down to 6.4% from close to 8% the year prior.

Baker attributes the dismal industry performance last year to high Cat losses, low reserve releases (down to their lowest level in seven years), ongoing troubles with auto in Ontario, Alberta and Atlantic Canada, and poor performance in certain commercial lines and personal lines markets, with products for high net worth individuals being a speculative sore point.

That said, insurers now have more than $47.5 billion in capital, the highest level ever reported by the industry, as noted in Property and Casualty Insurance Compensation Corporation (PACICC)’s 2018 annual report. “A well-capitalized industry provides stability for insurance consumers, promotes competition and attracts new entrants to the market.”

On the reinsurance side, companies experienced significant growth in claims. Baker attributes at least part of the pain to large reserve releases the previous year, “which suppressed reinsurers’ incurred losses that year.” All told, the 20 reinsurers included in the Reinsurance Research Council’s 2018 published results recorded net written premiums of $4.95 billion, investment income of $211.7 million, and an underwriting result of $740.2 million, with net income after tax of $705.3 million. Ratios came in at 53.1% (loss), 31.7% (expense) and 84.87% (combined).

Auto insurance “…is a product that has been subject to enormous swings in profitability and subject to constant reforms over the past 20 years,” as PACICC notes.

Not much appears to have changed, particularly since Ontario auto “appears [again] to be unprofitable in 2018,” PACICC adds.

The problems with Ontario auto are multi-fold and complex, Insurance Bureau of Canada (IBC) explains, but can be summarized in three high-level statements:

IBC is optimistic that Ontario’s ‘Putting Drivers First’ reforms, which emphasize ‘care not cash,’ puts proper emphasis on those injured in vehicular accidents. In addition, the reforms will allow for electronic proof of insurance, placing Ontario in a league with several other jurisdictions in North America and elsewhere.

Looking at Alberta, claims costs are increasing by more than 10% a year, with loss ratios hovering in the 130% area. This is translating into premium increases, availability issues, less choice and no innovation as the product has not been reviewed in some time. Insurers are concerned that the 5% cap on rate increases implemented by the previous government has remained in place and that the true drivers of higher costs have yet to be addressed. The industry is calling for the government of Alberta to work closely with the industry to address the underlying cost drivers and remove the cap.

Looking to Atlantic Canada, “Auto insurance in Newfoundland and Labrador is another source of concern,” says PACICC. “The province did not introduce the same reforms as the other provinces in Atlantic Canada. Claims costs are rising faster than premiums. There are no signs that product reform is being considered in the near term….History suggests that government intervention will be required before the product returns to profitability.”

Not a huge auto market, but an industry concern nonetheless.

We have clearly reached the point in Canada when stating that a given year was active from a severe weather standpoint is a complete waste of breath. Now, a quiet Cat year is far outside the norm and large losses are business as usual. Only one of the past 10 years can be considered “quiet.”

Last year, unfortunately, did not fall far outside the norm. More than $2 billion in insured losses were racked up from disasters that met or exceeded the $25-million threshold for catastrophic claims, as set out by Catastrophe Indices and Quantification Inc. (CatIQ). (See Page 31 for a 2018 Cat summary.)

Twelve Cats and nine “notable events” — events that generally fall into the $10- to $25-million range — were declared in 2018. Last year turned out to be the fourth-costliest year on record for insured disaster losses in the country (first place: 2016; second place: 2013; and third place: 1998).

There were no really big single losses in 2018 along the lines of the 2016 Fort McMurray wildfire or the 2013 southern Alberta floods. However, just two events — the May 4 Southern Ontario/Quebec windstorm, and the September 21 tornado sequence in the National Capital Region — caused more than $935 million in insured losses. When claims adjustment expenses are added, that particular pair of events left the industry with close to $1 billion worth of cheques to write for more than 80,000 claims filed.

Although water continues to be a challenge for the industry, last year showed that extreme wind can be a driver of significant insured loss in Canada. A wind event doesn’t need to be tornadic to produce big claims numbers; indeed, extreme wind partially or fully caused 62% of all natural catastrophe events recorded by IBC between 1983 and 2016, according to an Institute for Catastrophic Loss Reduction (ICLR) analysis of IBC data.

Canadian insurers have dealt with a nearly-unbroken string of major severe weather-related losses since 2009, with many years nearing $1 billion in claims; several exceeded this number handily. (See Chart on this page.) In only one instance, in 2015, losses were considerably below $1 billion. None of these numbers include claims adjustment expenses.

There is no indication that this trend in Cat losses will abate anytime soon. There is a sense that, given that $1-billion annual losses are no longer rarities in Canada, we may in fact be moving quickly toward $2 billion as the next “new normal.”

Although Cat losses have been financially manageable to date (thanks in great part to widely accessible and affordable cat reinsurance cover), ICLR is cautioning the industry that continuing urbanization and a warming climate will make managing natural perils considerably more challenging in the decades ahead. Property insurers may find that price adjustments and changes to deductibles, caps/limits and exclusions may not be enough to prevent severe weather from heavily impacting their bottom lines; one answer is to fully embrace loss control that is based on the latest scientific understanding.

Over the past decade and a half, it has become all too clear that auto insurance has nearly (and probably) always been a huge challenge for Canadian insurers; that remains true to this day. And while it remains to be seen whether it will continue to be a perennial thorn in the industry’s side, it’s probably a safe bet that it will continue to vex the industry until products are torn down to their very foundations and rebuilt from scratch. In auto lines, past performance seems to be a pretty good indicator of future success.

This, of course, can’t be said for severe weather. Cat losses will increasingly be influenced by a climate that is getting warmer and, in many places, wetter. Here, the past is no longer an indicator of what we can expect going forward.

It’s an interesting juxtaposition of the need to consider both present and future and, in both cases, a costly one.