One in 10 Manitoba drivers who participated in voluntary roadside surveys conducted last fall tested positive for drugs, according to the recently released survey findings. 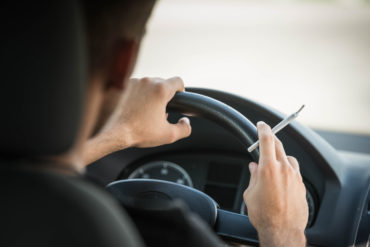 Manitoba Crown Services Minister Ron Schuler and Manitoba Public Insurance (MPI) announced the findings of the Manitoba Drug and Alcohol Roadside Survey last week, the purpose of which was to establish a baseline for current drug and alcohol usage on Manitoba roadways. Of the 1,230 drivers who participated in the survey, 124 tested positive for some drug, MPI said in a press release.

“Survey results are a clear indication that despite significant education and enforcement efforts, many Manitoba drivers continue to operate motor vehicles while impaired by drugs or alcohol,” Schuler said in the release. “Our government has committed to making legislative changes in response to the legalization of recreational use of marijuana and these results will help guide not only messaging related to the dangers of drug and alcohol use while driving, they will also provide a baseline from which we will measure the effects of both legislative changes and future enforcement efforts.” 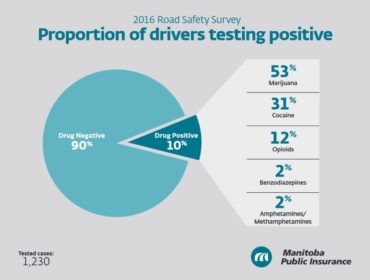 Prairie Research Associates were contracted by MPI in the fall of 2016 to conduct anonymous, voluntary roadside surveys to measure drug and alcohol use while driving. This initiative involved the collection of breath and oral fluid samples – which were immediately destroyed after testing – to measure level of alcohol and screen for specific drugs, the insurer said in the release.

Overall, 2.4% of drivers produced a blood alcohol concentration greater than nothing. When that data was weighted for population and traffic flow, the proportion of Manitoba drivers who tested a positive BAC was 0.6%, MPI reported.

“The low incidence of alcohol presence suggests that most Manitoba drivers are making the responsible decision to not drive after drinking,” suggested Ward Keith, vice president, loss prevention and communications with MPI.

But, “at 10 per cent, the prevalence of drugs in the tested drivers is significantly more common and extremely concerning,” Keith noted. “While the survey does not necessarily provide an indication of driving impairment, prevalence alone provides reason for concern and lends support for targeted drug driving awareness and other road safety interventions.” 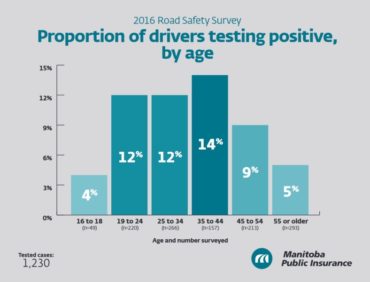 According to a recent medical study published by the British Medical Journal, crash rates for drivers under the influence of cannabis are two to six times higher than for drivers who are not impaired. The different rates are due to how much and how often drivers have smoked cannabis, MPI said. Data also showed that in 2013 (the last year available), 95% of fatally injured drivers in Manitoba were tested for the presence of drugs in their system. Of those drivers, nearly 40% tested positive for the presence of drugs.