Nearly two million homes in 13 western states are at an extreme or high risk of wildfire damage, according to a new report from CoreLogic, Inc. 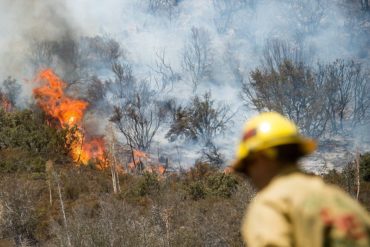 The Blue Cut fire burns in Upper Lytle Creek near Wrightwood, Calif., on Friday, Aug. 19, 2016. Firefighters were on the offensive Friday as they worked to expand significant gains against a huge wildfire that chased thousands of people from their homes in Southern California. (AP Photo/Noah Berger)

CoreLogic, a global property information, analytics and data-enabled solutions provider, said on Wednesday that 1.8 million single-family homes across 13 states in the western United States are currently designated as “Extreme” or “High” risk of wildfire damage, representing a combined total reconstruction cost value (RCV) of almost US$500 billion. An additional 27 million properties, with an estimated RCV of US$6.7 trillion, fall into the “Moderate” or “Low” risk category, CoreLogic noted in a statement.

The CoreLogic Wildfire Risk analysis designates risk levels as Extreme, High, Moderate and Low based on a numeric risk score ranging from 1 to 100 assigned to individual properties. This score indicates the level of susceptibility to wildfire, as well as the risk associated with the property being located in close proximity to adjacent high-risk properties or areas. “This proximity designation is important since wildfire can easily expand to surrounding properties and cause significant damage even if the original property was not considered high risk,” CoreLogic said in the statement. 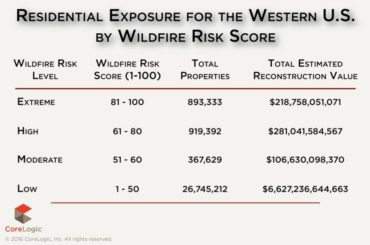 At the state level, California and Texas rank first and second for the total number of homes in the Extreme wildfire risk category due to a large number of residential properties in these states combined with the proximity of high-risk vegetation and terrain. Combining both the High and Extreme categories, California tops the list with 645,445 properties at risk, followed by Texas (532,317) and Colorado (195,601). California also has the highest RCV in each of the top two risk levels at more than US$250 billion, followed by Texas and Colorado at almost US$94 billion and US$54 billion, respectively.

Of the 258 “core based statistical areas” that were analyzed based on wildfire risk, Riverside-San Bernardino-Ontario, Calif. ranks first for the most number of homes at Extreme risk with 51,775 properties falling into this category, followed by Sacramento-Roseville-Arden-Arcade, Calif. (41,937) and Denver-Aurora-Lakewood, Colo. (33,226). In terms of RCV, Sacramento-Roseville-Arden-Arcade, Calif. edged out Riverside-San Bernardino-Ontario, Calif. by one million dollars at US$16.4 billion compared with more than US$15.3 billion.

The report noted that in 2015, the amount of area consumed by wildfires in the U.S. topped 10 million acres for the first time, recording a comprehensive total of 10,125,149 acres, according to the National Interagency Fire Center. By comparison, the average burned acreage per year over the past 20 years (1995-2014) was 5,820,402 acres.