MONTREAL – About 15,000 Hydro Quebec customers were still without electricity this morning after heavy rain and strong winds caused damage to power lines Wednesday.

The utility says its crews worked through the night to restore power to 90 per cent of the homes that had been affected. 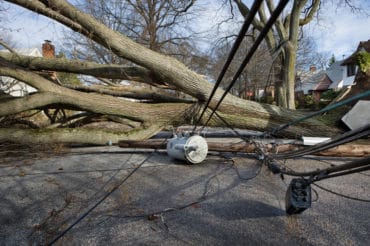 As many as 175,000 customers lost power Wednesday, with Montreal experiencing the most outages, followed by Laval to the north and communities to the southeast.

In the Montreal area, more than 100,000 customers were without power at some point.

Thunderstorms that crossed the region were accompanied by wind gusts of more than 90 kilometres per hour in some locations, including at Montreal’s Pierre Elliott Trudeau Airport.

Hydro-Quebec said the storm cell caused “significant damage to the distribution network” and the outages were caused by vegetation coming into contact with wires.

Before crossing into Quebec, the storm also caused damage in the Ottawa area.

A woman in Smiths Falls, Ont., said two barns across the road from her were destroyed by what seemed to be a tornado. Environment Canada, however, said it had no reports of a tornado touching down in the area and blamed the damage on strong winds.

Hydro One said about 1,000 customers were without power in the Ottawa region as of Thursday morning.

More News
Related
How much this province’s “historic” flooding will cost the industry
What made the Dunrobin tornado so unique
What’s the likelihood of an EF5 tornado in Canada?
How reliable are severe weather emergency alerts?