A British Columbia court recently found several individuals jointly liable for damages caused to vehicles, insured by Insurance Corporation of B.C., during riots in Vancouver in June, 2011, but the court declined to award punitive damages. 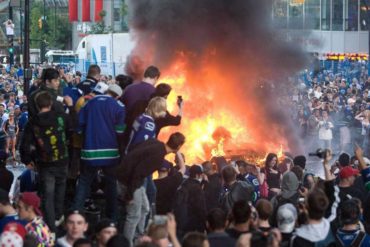 Vancouver Canucks fans watch a car burn during a riot following game 7 of the NHL Stanley Cup final in downtown Vancouver, B.C., on June 15, 2011. Prosecutions for crimes that took place during the 2011 Stanley Cup riots have come to a close, with two more men sentenced to time behind bars. Both William Fisher and Jeffrey Milne were found guilty on a series of charges including aggravated assault, taking part in a riot, and break and enter. THE CANADIAN PRESS/Geoff Howe

On June 15, 2011, the Boston Bruins beat the Vancouver Canucks 4-0 in the seventh game of the Stanley Cup Final. Riots broke out.

ICBC sued 82 defendants after the government-owned auto insurer paid vehicle owners for their losses. Ten defendants contested their liability up to and including the trial, while 37 settled with ICBC.

“Default judgments for damages to be assessed were given against 35 defendants,” Mr. Justice Elliot Myers of the B.C. Supreme Court wrote in his decision released June 16.

“The main and novel legal issue raised is whether the defendants are jointly liable for all the claimed damage, or portions of it, due to the defendants having participated in the riot as a whole,” Justice Myers noted, adding that a previous Supreme Court of Canada ruling allowed for “joint liability arising out of procuring a tort through inducement, enticement or persuasion.”

The facts of the lawsuit “come largely from video evidence,” Justice Myers noted.

Justice Myers suggested this statement is “too broad,” adding ICBC’s claim “does not recognise that the assistance rendered to the principal tortfeasor must be substantial.” He added that “someone who has refused to leave the riot in order to take photographs would be equally liable for the destruction of a vehicle by someone else even if they never encouraged that destruction, much less laid hands on the vehicle.”

But Justice Myers did find that people “‘piling on’ a vehicle in order to damage or destroy it may be joint tortfeasors if it is apparent they acted together pursuant to a common design to do the damage.”

One ICBC-insured vehicle was a Nissan Sentra. Justice Myers found Timothy Lau jointly liable for damage to the Sentra.

Lau “assisted a group of several other people in flipping the vehicle onto its roof,” Justice Myers wrote.  “He then jumped on the underside of the vehicle, made victory motions with his arms, and joined in chanting” an expletive about the Boston Bruins.

In a separate criminal case, Lau “pled guilty to participating in the riot and was sentenced to four months’ incarceration, two years’ probation and a $1,500 victim fine surcharge,” Justice Myers noted.

Another defendant, Travis Alexander, was found jointly liable for the destruction of a Nissan Versa. Alexander “was one of several who jumped” on the vehicle and, “with other rioters,” Alexander flipped the Versa onto its side.

Alexander had been separately convicted of participation in a riot and sentenced to four months in prison.

Alexander “was part of a common enterprise or design to destroy the vehicle or was a concurrent tortfeasor causing indivisible damage,” Justice Myers ruled.

Joel Corrigan was found jointly liable for damages to a Hummer. Among other things, Corrigan “picked up a large plank of wood and threw it twice at the windshield of the Hummer, managing to force it into the car on the second throw,” Justice Myers wrote.

In a separate case, Corrigan “pled guilty to participating in the riot and was sentenced to 45 days’ intermittent incarceration.”

Also held jointly liable for the loss to the Hummer was Andrew Cuthbert, who had tried to overturn the vehicle.

“He then tried to open the gas tank,” Justice Myers wrote. “He moved away from it but returned shortly after and hit it multiple times with a large piece of lumber.  Someone had set a fire on the front seat of the vehicle and Mr. Cuthbert added several pieces of wood to the fire.”

Also damaged was a Mini Cooper which was parked in the Parkwell Plaza Parkade. Justice Myers found Jordan Houde jointly liable for the full loss of the Cooper. Houde “watched as members of the crowd hit the vehicle with various objects and flipped it over,” Justice Myers wrote. “The crowd continued to hit the vehicle and jump on it.  In front of a crowd, using a large wood object, Mr. Houde struck the back of the vehicle four times.  He then moved around to the front of the vehicle where he again struck it.”

Nathan Kozak Welschlau was found jointly liable for full loss of a BMW.

“The videos show him kicking the vehicle and jumping on top of the roof,” Justice Myers wrote. “There are photos of him sitting on the trunk when the forward part of the vehicle is on fire. Videos show him taking a newspaper vending box and putting it on the car when it was on fire in an apparent attempt to set the box on fire.”

In a separate case, Welschlau pleaded guilty to participation in a riot and was sentenced to a 90-day intermittent prison sentence.