3 steps for an effective back-to-the-office plan

If back-to-the-office conversations are just starting at your company, or if you are finding that an early strategy isn’t working, employers should take a three-step approach to creating a successful plan, a business strategist suggests.

As a manager, the first step is to make sure you understand the company’s official guidelines, Liane Davey, an author and team effectiveness advisor and professional speaker, wrote in a blog for Harvard Business Review. After that, it’s a matter of working towards a trial plan and revisiting or reworking the plan as necessary.

Business managers — including those in the Canadian property and casualty insurance industry — should be well-versed in the organization’s rules. Questions to consider include: Is your company keeping its full real estate footprint? Is there an official policy on number of days required in the office? Are flex hours allowed?

“You don’t want to inadvertently run afoul of the company’s official guidelines, so start there before talking to your own team,” Davey wrote in How to Have Tough Conversations About Returning to the Office, published Friday. “I’ve already seen some leaders solicit team members’ preferences for returning to the office before getting clear on what will work from an organizational perspective. Do your homework, so that you can come to the conversation knowing the non-negotiables.”

Another pitfall to avoid: Getting wrapped up in finding a solution that everyone perceives as “fair.” Consider each person’s role and how those responsibilities suit different approaches, Davey advised. “An administrative assistant might need to be in the office to accomplish a majority of their tasks, whereas a proposal writer could do the lion’s share of their work from anywhere. 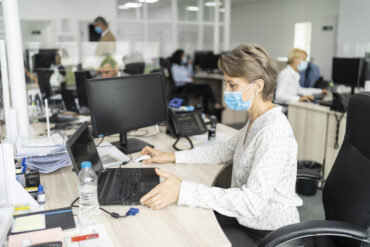 Another risk is trying to create an optimal solution for each individual, only to create a sub-optimal situation for the entire team. Ask how one person’s role interacts with others in the group. Consider which return-to-work plan would be in the best interests of supporting collaboration, encouraging camaraderie, and fostering a positive workplace culture.

Once these pitfalls are addressed, it’s time to work towards a plan. Start by developing a set of guiding principles for each individual working arrangement. For example, if your brokerage’s guiding principle is “the customer comes first,” every proposed working arrangement would be evaluated first on its impact on the client. Or if “time together matters,” there could be one day a week where everybody on the team needs to be in the office at the same time.

Then, arrange a time to speak with each person individually. Ask everyone to think about what’s important to them and some options for their personal return-to-the-office. When meeting, start by asking if they have any questions about the guiding principles, Davey advised.

“Be clear about what’s cast in stone and where there are opportunities for creative solutions.” Davey wrote. For example, instead of asking, “So, when would you like to come into the office?” ask which of the employer’s guiding criteria are most important to the employee. “If both parties understand the factors that are important to one another before jumping into potential solutions, you’ll avoid suggesting ideas that might be met with instant resistance, and you’ll zero in on appealing answers much more efficiently.”

Once the employees’ perspectives and the employer’s guiding criteria on the table, work toward a trial arrangement, being as flexible and creative as possible.

The next step is to agree on a date to revisit the plan. It could be a quick check-in after the first couple of weeks and a formal evaluation after six weeks. As the agreed-upon date nears, ask everyone to consider their current working arrangement and to reflect on any issues or concerns with the plan and its implementation. For example, one worker may have difficultly joining team meetings remotely due to a poor internet connection, while another may be multi-tasking while connected to remote meetings.

Keep revising the plan until you land on the best solution for the organization, the team, and the individual. Davey said one of her favourite ways to ask for difficult feedback is to say, “What did you love about how I managed this arrangement, and what do you wish I had done differently?

“For some reason, asking people what they wish was true softens the language enough for them to be candid about what they would like to be different.”

On the employee side, if they committed to a plan, but didn’t stick to it, that’s a performance management issue. “Do as you would with any performance issue,” Davey instructs managers. That means clarifying expectations, providing feedback about observed behaviour, and then sharing the implications of the behaviour on the work, team, and manager. Then ask the person what they will do differently from now on.

“Some people are more than eager to return to work, some are dreading it, and others are ambivalent,” Davey concluded. “Engaging in these conversations calls for a little more preparation than normal. The investment will be worth it because you’ll be more clear, more confident, and more compassionate when the time comes.”