Amid a wave of sump pumps, backwater valves and other methods designed to keep home basements dry comes a new, simple way to mitigate flood risk – an e-sensor.

George Tsintzouras, CEO and co-founder of Canadian water tech company Alert Labs, became interested in creating such devices based on a bad experience he remembers as a property owner. 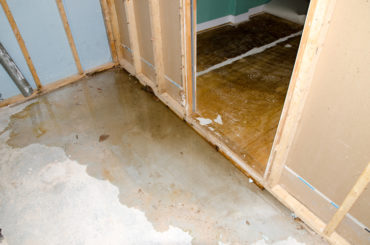 “The reason why we started the company is that we actually owned properties that ended up with floods and seeing water damage in them – things that were absolutely preventable,” Tsintzouras told Canadian Underwriter Friday. “A tenant once called me and said, ‘I forgot to tell you about a small leak that happened last month, but you’d better get over here right away because there’s a $15,000 expense and the plumber says the ceiling downstairs has caved in.’ The unfortunate part is that there were no technologies to help us understand that the problems were happening, so that we could avoid the expenses.”

The average water damage claim costs a Canadian homeowner approximately $43,000, according to Blair Feltmate of the Intact Centre on Climate Adaptation. While several commercial solutions are available to mitigate flood risk, many of them simply aren’t scalable, Tsintzouras said. Some backflow solutions require extensive retrofitting, for example, meaning that insurers have their work cut out for them if they want to convince homeowners to adopt them for their homes.

A water-flow sensor, on the other hand, is about $395 and takes the average person two minutes to install. “It’s literally a Fitbit for your water meter– you strap it on and walk away,” says Tsintzouras. “It connects immediately to cellular towers and monitors minute-by-minute water flow and catches leaks in pipes in your home. And it pairs with these companion sensors that look for water ingress on properties, such as water leaks in the basement foundation.”

Water sensors are hardly a new concept. They have been around for several years, so why would they suddenly take off now?

Tsintzouras cites several reasons, including how technology has evolved, as well as public education around the Internet of Things (IoT).

“Ten years ago, most homeowners didn’t even know what IoT meant,” he said. “Luckily, we have these giants spending marketing dollars to educate the world that people need to be able to talk to their light switches. Today, with smart phones, everyone carries around a computer in their pockets. Consumers demand real-time information in their pockets about what’s happening to the things they care about the most – their homes, their children, their pets.”

That explains the need, but what about the scale?

“The scale happens when technology companies figure out ways to make it super-easy to install, without requiring technicians and tradespeople. If you bundle all that together, you get critical mass.”