Distracted driving behaviours that your clients deem to be “safe”

Auto insurers take note: the majority of your clients admit to engaging in distracted driving behaviours, but they consider these behaviours to be safe.

The survey results highlight the difference between drivers and passengers when it comes to distracted driving behaviours. For example, as noted above, most drivers who engage in distracted driving rationalize what they are doing as safe. And yet, eight in 10 passengers say they are somewhat or very uncomfortable when witnessing their driver texting or calling (up from 76% in 2020 and 75% in 2019).

The difference in perspective appears to be a case of, “When I do these things, they are safe, but when other people do those things, they are deadly,” Jameson Berkow, managing editor of RATESDOTCA, wrote in an article about the survey results.

“The findings are disconcerting when compared to results from previous years, which show a rising number of respondents (47% in 2021 vs. 40% in 2020) believe distracted driving is the leading cause of motor vehicular traffic deaths compared to 34% who said impaired driving was the leading cause,” the rate comparison site said in a press release Tuesday. 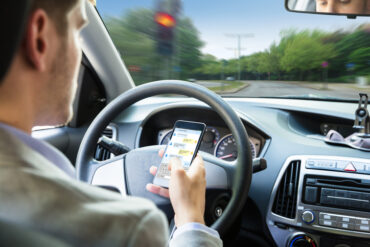 According to the survey, respondents admit to engaging in these distracted behaviours:

“Drivers get too hung up on specific definitions of distracted driving when it is really a very simple concept,” Berkow told Canadian Underwriter Tuesday.

“Operating a machine capable of moving several thousand pounds of metal at 10% the speed of sound requires our full attention. Anything that reduces that attention, whether it specifically involves a hand-held electronic device or not, qualifies as distracted driving. Rummaging around in a grocery bag on your passenger seat for a sandwich to take a bite of it; turning around to briefly scold misbehaving children in the back seat; or flipping between different radio stations on the dashboard all qualify.”

Helping drivers understand the broader universe of consequences related to a distracted driving conviction is definitely an important consideration, Berkow said. Besides the obvious potential for injuries or death, there are also legal consequences in the forms of fines and demerits, and long-term insurance risks.

“Fines can range into the thousands of dollars depending on where in Canada the offence is committed, but our research has shown that having a distracted driving conviction on your record leads to car insurance premium hikes ranging from 15% to 25%,” Berkow said. “Distracted driving convictions involving collision, meanwhile, can increase the cost of your car insurance by as much 50%.

“Those higher rates will stick for several years, which can easily add up to costing several times more than the initial distracted driving fine.”