Nearly 8.5 million residential and commercial properties in Florida are at either “extreme,” “very high” or “high” risk of wind damage from Hurricane Irma, new data from CoreLogic shows. 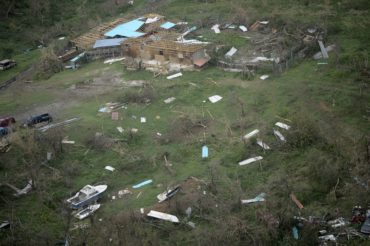 Devastated buildings from the island of Culebra, which suffered damages by the passage of Hurricane Irma, are seen form the air, in Puerto Rico, Thursday, Sept. 7, 2017. About a million people were without power in the U.S. territory after Irma passed just to the north, lashing the island with heavy wind and rain. Nearly 50,000 also were without water. (AP Photo/Carlos Giusti)

The analysis encompasses single-family residential structures less than four storeys, including mobile homes, duplexes, manufactured homes and cabins, among other non-traditional home types. “This does not infer that there will be no damage to residential units greater than four stories, as there may be associated wind or debris damage,” CoreLogic noted. “However, including all high-rise residential units in the CoreLogic analysis would inaccurately inflate the number of homes at risk of storm surge flooding by including homes that are elevated above the potential for damage from surge waters.”

Our thoughts are with everyone affected by #HurricaneIrma. Text IRMA to 20222 to donate $10 to @redcrosscanada relief efforts. pic.twitter.com/BrxxdlLgVK

Storm surge occurs when water is pushed toward the shore through the force of powerful winds associated with cyclonic storms. High winds and low pressure created by a storm causes water to accumulate at its centre, and as it moves across the ocean, the strong winds inside the hurricane act as a plow, causing water to pile up along the front of the storm, CoreLogic explained.

Ratings firm A.M. Best Company said in a statement on Friday that the hurricane has the “potential to cause catastrophic losses in Florida and surrounding states. If the track of the storm progresses as anticipated,” A.M. Best said, “Hurricane Irma will fall under the category of an extraordinary event, making it one of the worst hurricanes to make landfall in the United States.”

In its Best’s Briefing, titled A.M. Best Comments on Hurricane Irma’s Potential Impact on U.S. Property/Casualty & Global Reinsurance Industry, the ratings firm noted that although many of the national commercial lines writers have “meaningfully reduced their exposures to wind events in the Southeast over the past decade, the commercial insurance segment likely will experience significant claims for direct property losses and business interruption if Hurricane Irma’s impact is in line with current forecasts,” the statement said. “A.M. Best anticipates that third-quarter and annual earnings for most public commercial segment companies will be adversely affected by the one-two punch of Hurricanes Harvey and Irma. For rated companies with significant concentrations in Florida and the nearby states that could be impacted by this storm, the effect may be more substantial.”

A.M. Best further expects “the majority of reinsurers” to incur losses from the event, although the ultimate financial impact will depend on the storm track and damages inflicted. “Should Hurricane Irma’s impact amount to an insured industry loss above US$75 billion, the reinsurance sector likely is to incur a meaningful underwriting loss for the full year and experience a modest loss of capital,” the statement concluded.

The Associated Press reported on Friday that Irma left in its wake “a ravaged string of Caribbean resort islands strewn with splintered lumber, corrugated metal and broken concrete.” The death toll in the Caribbean stood at 21 and was expected to rise as rescuers reached some of the hardest-hit areas. Although the hurricane weakened from a Category 5 to a Category 4 storm on Friday morning with winds of 250 kilometres per hour, it “smashed homes, schools, stores, roads and boats on Wednesday and Thursday as it rolled over some of the world’s most famous beach paradises, including St. Martin, St. Barts, St. Thomas, Barbuda and Anguilla,” the Associated Press reported. The storm knocked out power, water and phone service and trapped thousands of tourists.

At least 23 people are dead after Hurricane Irma tore through the Caribbean on Thursday. pic.twitter.com/jp6RFZ6vXk

Via Jonathan Falwell on St Martin: No power, no water, everything destroyed. Buildings gone. Please pray as this island is decimated. #Irma. pic.twitter.com/Gu5iwgUX4P

More News
Related
CoreLogic estimates insured flood loss for homes affected by Hurricane Harvey at US$6.5 billion to US$9.5 billion
Insured residential, commercial property losses from Hurricane Matthew estimated to be US$4 billion to US$6 billion: CoreLogic
Insured losses of New Zealand quake could be as much as US$3.5 billion: AIR Worldwide
Which insurers were hit hardest by the third-quarter hurricanes?