If a piece of an asteroid – like the ‘city killer’ that narrowly missed striking the Earth last week – comes flying at your client’s house, they’re likely covered by their homeowner’s policy.

That’s because a standard homeowner’s policy includes specified perils of a “falling object which strikes the exterior of a ‘dwelling’ or detached private structure” and “impact by aircraft or land vehicle.” 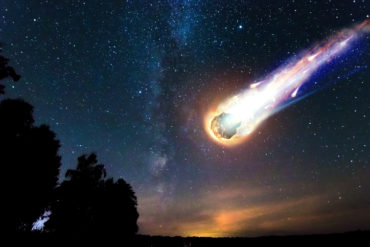 “So, an asteroid or satellite would be covered as falling objects for homeowners,” said Steve Kee, director of external communications with the Insurance Bureau of Canada (IBC).

Canadian Underwriter asked IBC about the insurance implications of an asteroid strike or something similar. Last week, the 100-metre-wide asteroid, which one astronomy professor dubbed a “city killer,” flew past the earth at 24 kilometres per second. That’s 70 times the speed of sound, or roughly the same speed as the asteroid that wiped out the dinosaurs.

The object, dubbed Asteroid 2019 OK, missed the earth by about 70,000 kms, placing it closer to Earth than the moon.

If a chunk of this asteroid were to hit your your client’s home, they would likely be covered. But what if a chunk fell on their vehicle in the driveway? Covered, assuming they have optional comprehensive coverage.

What about damage to commercial property? The coverage here is not as clear, because there is no specific reference to “falling objects,” Kee said. Unless, of course, it was “dropped” from an aircraft or spacecraft.

In the United States, by comparison, falling objects – including asteroids, satellites, meteors and space debris – are covered under standard homeowner policies and business insurance policies. This would cover damage that the falling object causes to the structure of the home or business, as well as to property or belongings that are also damaged or destroyed as a result. If a satellite, meteor or asteroid falls on a car, coverage is provided under the optional comprehensive portion of an auto insurance policy. And if debris causes an auto accident, the liability portion of the policy would cover medical expenses or related lawsuits, the U.S. Insurance Information Institute reports.

In the case of Asteroid 2019 OK, its presence was announced mere hours before it zoomed past the planet, noted Michael Brown, associate professor in the school of physics and astronomy at Monash University in Australia. “The lack of warning shows how quickly potentially dangerous asteroids can sneak up on us,” he wrote July 25 in The Conversation.

Asteroids like this one do pose a genuine risk, Brown said. For example, the Chelyabinsk meteor over Russia in 2013 was equivalent to a large nuclear explosion.

With just a day or even a week’s notice of an asteroid strike, “we would be in real trouble,” Brown said. However, with more notice there are options, such as changing an asteroid’s velocity. “Given that the pale blue dot of Earth is just 12,750 km across, a small nudge to a big rock may be enough to avoid annihilation.”