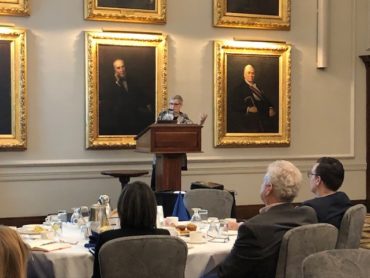 Elizabeth English, founder and director of the Buoyant Foundation Project and associate professor at the University of Waterloo, speaks at the IIC’s Lowes Fund Breakfast on Nov. 13, 2019.

Amphibious architecture could be the key to mitigating flood risk and making insurance affordable for those living and working in floodplains, according to one expert.

The technology allows structures to float as water levels rise. Amphibious construction and retrofitting of properties would protect homeowners from flooding by allowing a building to float above the water during a flood.

This method works in tandem with Mother Nature rather than trying to fight climate forces and eventually lose, said Elizabeth English, the founder and director of the Buoyant Foundation Project and an associate professor at the University of Waterloo.

“Why fight with the floodwater when you can just float on it?” she told attendees of the Insurance Institute of Canada’s Lowes Fund Breakfast on Wednesday morning.

In speaking with the micro-insurance industry about this project for low-income rice farmers in Vietnam, English was told that “amphibious construction could bring down the level of risk to the point where flood insurance could become affordable in developing countries.”

The same concept might apply to Canadian homeowners in floodplains. If the risk of damage can be reduced thanks to amphibious construction or retrofits, premiums could be lowered and those areas may be viable areas in which to live. “So I think that’s one of the reasons this is a technology that could be interesting to the insurance industry,” she said.

Here’s how it works: An amphibious structure will sit on dry land like any other building and looks virtually the same. But when a flood hits, these buildings are designed or retrofitted to rise along with the water, English explained. A vertical guidance system, usually steel posts, keeps the building from moving laterally. As the water recedes, the system ensures the building stays in the same spot as it comes back down and back to the foundation. Under the structure is something along the lines of Styrofoam-like products, concrete caissons (like what’s used in ship hulls), or even large plastic containers to help with buoyancy.

“Anything that will displace water can be used to provide buoyancy,” she added.

The Netherlands has been using this strategy since the 1990s. Some Louisiana areas have been using some form of this since the late 1970s.

And it’s not expensive to retrofit. One example English showed cost US$5,000, or $5 a square foot.

“What I like about amphibious construction is that it works with the water in synchrony with Mother Nature,” she said. “Not trying to control the water, not trying to tell the water that it has to go this way or that it has to go that way. Because, honestly, if we’re going to pick a fight with Mother Nature, eventually we’re going to lose. So we might as well develop systems that work in collaboration with the water and let the water be our friend, because the water is actually what’s lifting the house and keeping it safe.”

Placing a house on stilts to raise it above levels of potential floodwater is a common strategy in some areas. While potentially effective, stilts can fail. For instance, water may rise higher than expected and still flood the house. Another risk comes from wind at higher elevations. A wind’s force is stronger the higher up you are, English explained. So much so, that raising a house six metres increases the expected annual loss for roof damage by 75%.

“This is something that the insurance industry should take note of,” she said.