PartnerRe Ltd. reported a combined ratio of 87.7% during the three months ending June 30, a 20.6-point improvement over 108.3% during the same period in 2016, when Canada experienced its most expensive natural disaster ever and a loss from an energy client cost PartnerRe $42 million. 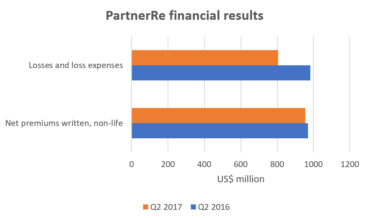 Hamilton, Bermuda-based PartnerRe, which has a Canadian branch, reported July 27 its second-quarter financials, recording net premiums written in non-life of $954 million during the most recent quarter, down from $970 million in Q2 2016, “primarily as a result of cancellations and non-renewals, higher premiums ceded and foreign exchange movements.”

PartnerRe provides both reinsurance and commercial primary insurance, including commercial auto, agriculture, aviation, credit/surety, engineering, energy and marine, among others.

When PartnerRe released its Q2 2016 results a year ago, the insurer reported that the wildfires in Alberta in May of that year contributed 7.5 points, or $73 million net of reinsurance and reinstatement premiums, to its results for the three months ending June 30, 2016.

Insured losses from the Alberta wildfire, which resulted in the evacuation of Fort McMurray, were estimated at nearly $4 billion, Verisk Analytics Inc.’s Property Claim Services (PCS) unit reported in November, 2016. The flooding that affected southern Alberta cost the industry about $1.7 billion.

About 85% of insured losses from the Alberta wildfire were covered by reinsurance and most of that was covered by European reinsurers, A. M. Best Company Inc. reported in November, 2016.

In July, 2016, PartnerRe reported that an energy loss contributed 4.3 points or $42 million net of reinsurance and reinstatement premiums to its results for the quarter ending June 30, 2016.

PartnerRe’s combined ratio during that quarter was 108.3%. The lower combined ratio in the most recent quarter “was driven by a strong performance” in its specialty segment, “with a technical ratio of 77.9%, highlighting the quality and diversification of our Specialty portfolio, but also by an improvement in our P&C non-CAT accident year technical ratio compared to the second quarter of 2016,” PartnerRe CEO Emmanual Clarke stated in a press release July 27, 2017.

Other reasons for the 20.6-point drop in the Q2 combined ratio included “the absence of catastrophic or large loss events in 2017,” as well as “improvements in attritional accident year technical ratio in both Specialty and P&C segments,” the company stated. 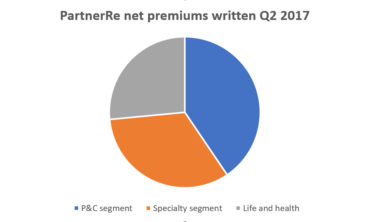 For the six months ending June 30, PartnerRe reported an underwriting result in non-life of $137 million, compared to an underwriting loss of $29 million during the same period in 2016.

Since March, 2016, PartnerRe has been owned by Turin, Italy-based investment firm EXOR NV, whose other holdings include significant interests in Fiat Chrysler Automobile and CNH Industrial NV, the maker of Case and New Holland heavy equipment.

In early 2015, PartnerRe was publicly traded and its board had recommended the insurer merge with Bermuda-based Axis Capital Holdings Ltd., instead of agreeing to be bought by EXOR. Had they merged, they would have formed a global top 5 reinsurer, Axis Capital reported at the time. But EXOR made several more offers to acquire PartnerRe and as a result PartnerRe’s board eventually recommended shareholders accept EXOR’s final offer. Axis Capital continues to be a separate publicly traded company.