Claims adjusters are watching to see if an overnight Ontario windstorm will meet the $25-million threshold of a natural catastrophe (NatCat).

As of September, Canadian P&C companies had paid out $2.1 billion for insured NatCat events this year.

For now, it’s too soon to tell, adjusters told Canadian Underwriter. Claims professionals are still busy talking to clients after a ferocious windstorm swept through southern Ontario Sunday, knocking out power to hundreds of thousands and bringing a hurricane-force gust to St. Catharines.

Record-breaking winds were reported throughout the day, including a gust of 118 km/h at Toronto Island and an “impressive” 141 km/h gust in St. Catharines, The Weather Network said Monday morning. “Those were both strong enough to set new all-time records for the month of November.”

The winds even caused ground-shaking in Toronto. “The wind speed was strong enough to be tracked on the data plot from the output of the seismometer Sunday evening,” Weather Network meteorologist Tyler Hamilton said.

Kumar Sivakumaran, vice president of national operations & business development with ClaimsPro, said the storm has “the potential” to be a Cat, but it’s premature to say. A Cat event costs P&C insurers $25 million or more in insured property damage, spread out over the entire P&C industry.

“We don’t believe this event is anything close to windstorms that occurred early May 2018,” Sivakumaran told Canadian Underwriter Monday, referring to the storm in southern Ontario and Quebec that cost insurers over $600 million. “There are going to be some exposures, but not significant.” 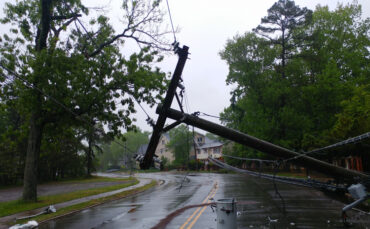 Because of social distancing arising from the pandemic, a majority of policyholders were at home and on the premises, Sivakumaran suggested. This would have mitigated the loss immediately. “With all of that being said, this windstorm could very well be the biggest weather-related event for Ontario this year.”

Greg Smith, chief client officer with Crawford & Company (Canada) Inc., agreed it remains too early to tell the extent of the damage and determine if the threshold for a Cat will be met. “But it will be something everyone will be watching closely as the day unfolds,” he said Monday morning.

Smith said the storm prompted a large volume of calls into Crawford’s centralized claim intake centre throughout the day Sunday and into the evening hours. “Call volumes were about twice that of a typical Sunday, with most calls in the [Greater Toronto and Hamilton Area] and surrounding areas reporting wind damage to homes and automobiles from falling and flying objects.

“We are continuing to see increased call volumes [Monday] morning and expect that to continue today as homeowners discover damage from the overnight hours and/or power is restored to impacted areas.”

Utility company Hydro One said early Monday morning that about 238,000 homes and businesses had yet to have their power restored. Some customers will likely have to wait until the afternoon or evening, the Canadian Press reported.

The outage area stretched from Windsor in the south to Sudbury in the north, all the way east to the Ottawa area. In many places, the powerful winds knocked down trees and branches that pulled down power lines, some of which blocked roads.

A damaged COVID-19 testing centre in Brampton had to close for the day as staff repaired the outdoor facility, the Canadian Press said. There was also flooding along shorelines and flood warning issued for Lake Erie. The Port Stanley Buoy in Lake Erie recorded waves higher than 15 feet.