American International Group, Inc. (AIG) has reported a net income of US$462 million for the third quarter of 2016 ending Sept. 30 compared to a net loss of US$231 million in the prior-year quarter.

Net income during the quarter included after-tax net realized capital losses of US$526 million, which largely reflected higher foreign exchange losses related to the British pound weakening following the Brexit vote, AIG said in a press release on Wednesday. After-tax operating income was US$1.1 billion for the third quarter of 2016, up from US$691 million in the prior-year quarter.

By segment, Personal Insurance pre-tax operating income grew to US$178 million in the most recent quarter from US$62 million, reflecting improved underwriting results, AIG said. The lower combined ratio in Q3 2016 – to 96.3% from 99.6% in Q3 2015 – was “principally driven by an improvement in the expense ratio.” Net premiums written (NPW) decreased to US$2.92 billion in Q3 2016 from US$3.02 billion in Q3 2015. Excluding the effects of foreign exchange, NPWs decreased by 6% primarily in Accident and Health, reflecting underwriting actions to strengthen the company’s portfolio and maintain pricing discipline, AIG said in the release. Catastrophe losses for Personal Insurance were US$26 million in the most recent quarter compared to US$58 million in Q3 2015. 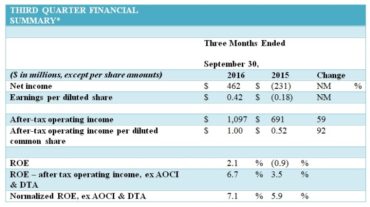 Commercial Insurance pre-tax operating income increased to US$729 million from US$592 million, AIG reported. This primarily reflected “the higher returns on alternative investment income, and an increase in the fair market value of assets accounted for under the fair value option, partially offset by an increase in underwriting loss in the current quarter driven by higher catastrophe losses and higher net adverse prior year loss reserve development.” The combined ratio increased three points from 102.3% in Q3 2015 to 105.3% in Q3 2016. NPWs decreased 17%, “primarily due to the continued execution of our strategy to enhance risk selection in our Casualty and Property product portfolios, the non-renewal of certain underperforming classes of business, the increased use of reinsurance, and adherence to our underwriting discipline in competitive market conditions.” Cat losses for the quarter were US$253 million compared to US$88 million in Q3 2015.

The Corporate and Other segment reported a pre-tax operating loss of US$522 million (compared to a US$396 million loss in Q3 2015) in the most recent quarter, primarily due to a $622 million loss recognition expense in Institutional Markets based on mortality experience studies that indicated increased longevity, particularly on disabled lives representing a legacy block of structured settlements underwritten pre-2010.

“We continue to execute on the strategic initiatives announced in January,” said Peter D. Hancock, AIG president and CEO, in the release. “The strategic divestitures that we announced this quarter, our portfolio management decisions, actions to run-off the legacy portfolio and capital allocation all exemplify our guiding principle of building economic value. We are successfully shaping and sculpting our company to be a leaner and more focused insurer. We remain committed to our 2017 financial targets, are ahead of plan in expense management, and continue to target a six-point reduction in our Commercial accident year loss ratio, as adjusted, despite volatile quarterly results.”