FORT MCMURRAY, Alta. – The huge wildfire that tore through parts of Fort McMurray and northeastern Alberta is classified as being held for the first time since it became out of control in early May. 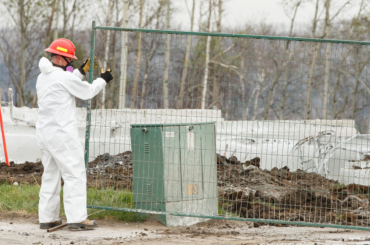 The huge wildfire that tore through parts of Fort McMurray and northeastern Alberta is classified as being held for the first time since it became out of control in early May. Photo: @FortMacToday.

Wildfire information officer Lynn Daina said the designation means the fire is no longer growing, but is not yet under control.

Daina said it’s an important day for firefighters who have been battling the blaze for weeks.

“It is a big deal. It is like the happy dance day,” she said Monday.

Thanks to hard work of firefighters & support staff the #ymmfire is now classified as being held. pic.twitter.com/3O5g5g4cyc

“There has been so much and so many people on this fire – more than 2,000 at its peak working it daily.”

The perimeter of the fire, including burned areas, covers just under 5,900 square kilometres.

Thousands of residents have been returning to Fort McMurray this month after being forced to flee on May 3.

Thanks to the hard work of firefighters the #FortMacFire is now classified as Being Held. #ABFire #ymm #ymmfire pic.twitter.com/U3ax5QyeVG

Got home yesterday. This area by Beaconhill was on fire during the evac, but now has some green in it. 🙂 #ymmstrong pic.twitter.com/H4AD8wIO0b

Thank you, @MayorMelissa, for sharing your story & your strength with us at #yyc16. You're a hero of #ymmfire too. pic.twitter.com/pbNvqCb8yn

We're open! @AMAcommunity in #ymm has re-opened its doors & back to serving our members & the community. #ymmstrong pic.twitter.com/iukONxNT6v

Trying to identify the gems for homeowners impacted by the #ymmfire in Fort McMurray, Canada. pic.twitter.com/pI8GExXb2c

Views from one area of Abasand. But there are many parts of the neighbourhood that are fine. #ymm #ymmfire pic.twitter.com/4UYI2zKcmN

.@globalnews Here's my #69Camaro before and after the #ymmfire
Be warned @ChevroletCanada it's tough to look at#YMM pic.twitter.com/vsKGhh7vzQ

We’re proud to announce that Suncor personnel donated more than half a million to #ymmfire relief pic.twitter.com/BPJ1vxpiH6

WATCH: Fort McMurray residents help one another get back on their feet @TomVernonGlobal reports #ymmfire https://t.co/BUc2Qxt9sX