A storm event with flooding, hail and wind from June 28 to June 30 in Alberta has cost an estimated $70,440,000 in insured property damage, according to a catastrophe bulletin from Property Claim Services (PCS) Canada. 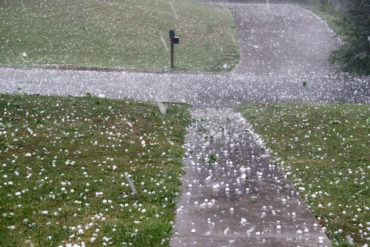 Meteorologists with Verisk Insurance Solutions said that a trough in northwestern portions of Canada sank southeastward during the last week of June. As this occurred, a frontal system developed at the surface and pushed southward through portions of Alberta, Saskatchewan, Manitoba and Ontario, sparking thunderstorms along and ahead of the southward moving front.

In Alberta, where this boundary was positioned more north-south oriented, multiple days of severe weather erupted from June 28 to 30, with storms producing high winds, large hail and heavy rainfall resulting in some flooding, the bulletin said.

In south Calgary, the communities of Woodbine, Cedarbrae and Canyon Meadows received substantial rainfall, causing flooding that damaged cars, homes and businesses. “It was reported that the Trans-Canada highway was underwater in the town of Strathmore,” the bulletin said. “City workers had to wade through waist-deep flood water to unclog storm drains throughout the town.”

Also in the Calgary area, High River and Okotoks were hit with massive amounts of hail, “so deep it had to be shoveled from the sidewalks.” The hail damaged the roofs and exteriors of homes and businesses and caused damage to the vehicles in the area.

PCS Canada said that the majority of claims are as a result of hail damage to vehicles, residences and commercial buildings. PCS Canada also estimates loss adjustment expenses of about $4.5 million, which is not included in the estimate of insured damages. The estimate that does not include loss involving uninsured property, including uninsured publicly owned property and utilities, agricultural, aircraft and ocean marine, including oil drilling platforms.

PCS Canada will resurvey the event in about 60 days.