Aon plc recently reported a 1% drop year-over-year drop in its first-quarter commissions, fees and other revenue from its insurance brokerage business, driven mainly by currency fluctuations. 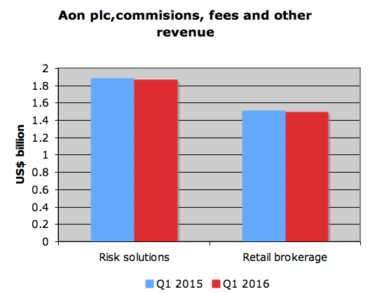 Commissions, fees and other revenue, from risk solutions, were $1.867 billion in the latest quarter, compared to $1.89 billion in the first three months of 2015. All figures are in United States currency.

The $23-million decrease “was driven by a 4% unfavorable impact from foreign currency exchange rates, partially offset by 3% organic growth,” Aon said in a report to the U.S Securities and Exchange Commission.

“In Risk Solutions, organic revenue growth in the first quarter of 2016 was driven by strong organic growth in Retail brokerage across both the Americas and International businesses, as well as modest growth in Reinsurance.”

Commissions, fees and other revenues from Aon’s retail brokerage were $1.495 billion in the latest quarter, compared to $1.513 billion in Q1 2015.

“Retail brokerage Commissions, fees and other revenue decreased 1% in the first quarter of 2016, driven by a 5% unfavorable impact from foreign currency exchange rates, partially offset by 4% organic revenue growth.”

In its retail brokerage, Aon places a variety of coverages, including liability, professional and directors’ and officers’ liability and workers’ compensation, among others.

From its reinsurance brokerage, Aon reported commissions, fees and other revenues of $372 million in Q1 2016, down from $377 million in the same period in 2015.

Aon places both treaty reinsurance and facultative reinsurance, as well as specialty lines such as professional liability, workers’ compensation, accident, life and health.

Subsidiary Aon Securities Inc.’s provides a variety of services, such as structuring and underwriting insurance-linked securities, as well as arranging financing for insurers, including Lloyd’s syndicates.

In addition to its London head office, Aon’s brokerage arm has major offices in Chicago and New York.

In Canada, Toronto-based Aon Reed Stenhouse has more than 20 offices.