A negligence lawsuit against the company that audited the financial statements of the entertainment firm formed in 1989 by Garth Drabinsky and Myron Gottlieb could reach the Supreme Court of Canada. 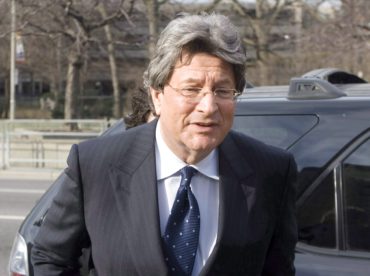 Livent co-founder Garth Drabinsky is shown in Toronto on March 25, 2009. Theatre moguls Drabinsky and Myron Gottlieb will find out Tuesday if their appeals on their fraud convictions were successful.The theatre heavyweights, whose company Livent Inc. produced Canadian and Broadway theatre hits such as “The Phantom of the Opera,” were each convicted of two counts of fraud in 2009.THE CANADIAN PRESS/Chris Young

In a decision released in 2014, the Ontario Superior Court of Justice found that Deloitte & Touche “failed to meet its professional standard of care” while auditing Live Entertainment Corporation of Canada Inc., also known as Livent.

That ruling was upheld on appeal, in a decision released Jan. 8, 2016.

In February, Deloitte applied for leave to appeal with the Supreme Court of Canada, which is scheduled to release June 9 its decision on whether it will hear Deloitte’s appeal.

After a trial held in 2013, Mr. Justice Arthur Gans, of the Ontario Superior Court of Justice found that Deloitte was not negligent in respect of audits during a before 1996, but Deloitte was “liable for damages arising from negligence in August/September 1997 and the spring of 1998.”

Livent – whose productions included The Phantom of the Opera, Show Boat and Kiss of the Spider Woman – was founded by Drabinsky and Gottlieb.

“On November 18, 1998, Livent issued restated financial statements for the fiscal years ended 1996 and 1997, and the first quarter of 1998,” wrote Mr. Justice Robert Blair of the Court of Appeal for Ontario. “The restatements identified over $98 million in accounting irregularities.”

The following day, Livent filed for insolvency protection in the United States and in Canada.

The following year, Livent was placed in receivership. In 2001, Roman Doroniuk was appointed Special Receiver and Manager of Livent for various purposes, including the lawsuit against Deloitte, which commenced in 2002.

Doroniuk sued Deloitte for “damages in contract and negligence arising out of Deloitte’s failure to follow generally accepted auditing standards (“GAAS”) and thereby discover material misstatements in Livent’s books, records and financial reporting attributable to the Drabinsky and Gottlieb fraud.”

Two years ago, Justice Gans awarded Livent $84.75 million in damages plus interest, for a total of $118 million.

Deloitte appealed and Livent cross appealed Justice Gens’ finding that Deloitte was not negligent in respect of the 1996 audits.

In its unanimous decision, the Court of Appeal for Ontario dismissed both Deloitte’s appeal and Livent’s cross appeal.

Deloitte “takes issue with the trial judge’s finding that it ought to have resigned in August/September 1997 or April 1998 at the latest,” wrote Justice Blair.

Court records indicate that Livent’s accounting software was modified “in various ways to facilitate the fraud.”

Furthermore, “between 1991 and 1993, Drabinsky and Gottlieb received approximately $7.5 million in direct or indirect kickbacks from certain Livent service providers through a system that saw the service providers present false or inflated invoices to Livent and then, after receipt of payment from Livent, forward an amount to Drabinsky and Gottlieb or one of their companies,” Justice Blair wrote in the 153-page decision.

In 1997, Livent entered into an “air rights” agreement  “purported to transfer Livent’s air rights above the Pantages Theatre and adjoining lands” for $7.4 million.

Deloitte “had a number of concerns” with the agreement, including a provision that “effectively allowed” the buyer to exit without paying the balance of $4.9 million.

In August, 1997, Deloitte presented its concerns to Livent’s audit committee, arguing that the sale revenues could not be reported in the second quarter of 1997.

“Ultimately, a compromise was reached,” Justice Blair noted. That compromised entailed a press release by Livent announcing that  ” in contemplation of a possible issuance of U.S. $100 million debt securities in the United States,” Livent had  “adjusted its accounting treatment for non-theater real estate transactions in order to be consistent with U.S.” generally accepted accounting principles.

This adjustment, the 1997 release by Livent added, would “result in the recognition of income before income taxes of $4.8 million ($0.17 per share) in the third quarter of 1997 rather than in the second quarter, as previously announced.”

That press release “left the reader with the mistaken view that the decision to revise the financials was driven by a technical U.S. (generally accepted accounting principles) issue, rather than by Deloitte’s concerns about the appropriateness of recognizing the revenue at all,” Justice Blair added.

He noted that as early as 1990, an internal memorandum at Deloitte noted that the Royal Bank of Canada was “not fully satisfied with their dealings” with Livent.

That memo stated that Drabinsky and Gottlieb were “not proving to be as ‘above board’ with the bank as they should be” regarding cash flows and other financial information” and that Deloitte officials  “should conclude that the relationship between the client and the bank is not good and that we should be particularly careful regarding the client’s verbal representations concerning his relationship with the bank and possibly concerning other matters as well,” Justice Blair noted.

Deloitte “takes issue with [Justice Gans’ finding] that [Deloitte] had an obligation to sever its relationship with Livent during this time period and that, by failing to do so, it was negligent,” Justice Blair wrote. “It contends that the evidence did not support the finding that it ought to have resigned in August/September 1997, and that an auditor’s decision to resign is a matter of professional judgment and is owed deference by the courts.”

But Justice Blair added there is “no reason to interfere with the trial judge’s finding that Deloitte ought to have resigned in August/September 1997.”