Artificial Intelligence (AI) attracted US$162 million in investments across 12 deals in the first half of 2017, the highest amount of funding in Canada in the past five years, according to the quarterly MoneyTree Canada Report from PwC Canada and CB Insights. 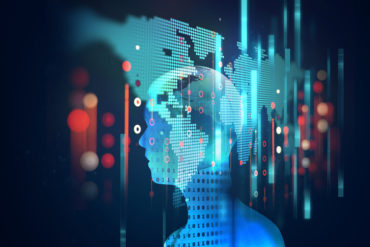 But despite the record high in AI deals, investments in venture-backed companies based in Canada slowed down in the first half of 2017, PwC Canada noted in a press release last week. Funding decreased 14% to US$885 million in the first half of 2017 from US$1.03 billion from the same period in 2016; the number of deals also decreased to 127 deals from 170 (25%) from the same period last year.

PwC Canada noted in the release that quarterly activity in Q2 2017 saw US$400 million deployed across 58 deals, a decline from Q2 2016, which also saw 58 deals but US$600 million deployed. Sector-wise, Internet deal count was up 19% from Q1 2017; Healthcare and Mobile accounted for much of the quarterly decline in Canada as a whole.

In terms of thematic areas, a US$102 million mega-round pushed annual funding to Canadian AI companies to the high of US$162 million across 12 deals through H1 2017, while deal activity is also on pace to surpass last year’s high, the release said.

“The increase of corporate investments in AI is shaping Canada as a leader in this sector,” suggested Chris Dulny, national technology industry leader with PwC Canada. “Canadian companies are attracting larger investments from top [venture capitals] (VCs) who are increasingly focused on our homegrown tech talent and innovation. The funding landscape which includes corporate and government funding makes Canada a top destination for international investors who are keen to see tech reach its full potential.” 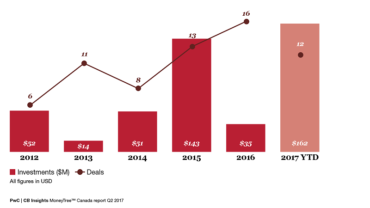 According to the report, deals and dollars invested were both down in the leading hub of Toronto, with US$107 million deployed across 24 deals. Vancouver saw three more deals completed than the first quarter of the year, but 29% less capital invested. Montreal saw deal count drop, but total funding spike 145% to US$189 million, buoyed by several larger financings.

“This wasn’t a great quarter for Canada’s venture ecosystem especially when viewed against the global and U.S. funding and deal trends our data reveals,” said Anand Sanwal, co-founder and CEO of CB Insights, in the release. “There are, however, some positive signals, including the resilience in seed-stage deal activity and the continued presence of corporate and corporate VC investors. In addition, as artificial intelligence startups have risen to the fore globally, Canadian companies working in AI are also gaining momentum and interest.”

Other highlights in the report include: