Aviva Canada is applauding the second reading of a private member’s bill in Ontario to combat distracted driving through the creation of designated “safe texting zones.” 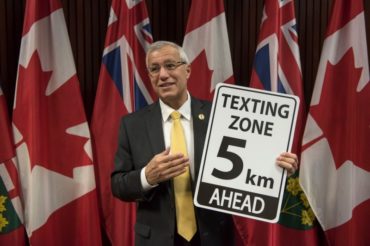 Bill 19, the Safe Texting Zones Act, passed second reading on Thursday. Brought forward by Nipissing, Ont. Progressive Conservative MPP Vic Fedeli, the bill, if passed, would amend the Highway Traffic Act and “designate any part of the King’s Highway where the shoulder of the highway may be used as a texting zone.” A texting zone is defined as an “area where a driver of a motor vehicle is able to park or stop safely for the purpose of using a hand-held wireless communication device.”

In a statement, Aviva Canada said that as an insurer providing coverage to over one million vehicles in Ontario, it knows firsthand the toll distracted driving has on its customers and is supportive of measures to address the issue.

“Distracted driving deaths have surpassed impaired driving deaths,” said Karin Ots, senior vice president of regulatory and government relations at Aviva Canada, in the statement. “There is such a stigma with impaired driving, but texting and driving is still relatively socially acceptable. It’s unacceptable and accounts for approximately 25% of all fatal accidents. We are hopeful that safe texting zones will encourage more responsible behaviour.”

Ots said that Aviva Canada urges the provincial government to adopt this legislation, as it will help make roads safer for all Ontarians.

Fedeli noted in the Ontario legislature on Thursday that the bill had previously passed second reading with all-party support prior to prorogation last year.

He also cited statistics from the Ministry of Transportation of Ontario that showed that drivers who use cellphones are four times more likely to be in a collision that drivers who focus on the road. “When drivers take their eyes off the road for more than two seconds, car crash risk doubles,” he said, adding that the Ontario Provincial Police cite distracted driving as a causal factor in between 30% and 50% of traffic collisions in Ontario, while the National Highway Traffic Safety Administration in the United States said that 80% of collisions and 65% of near-crashes have some form of “driver inattention as a contributing factor.”

Fedeli also read a quote from Kim Donaldson, the Insurance Bureau of Canada’s vice president for Ontario, who said that “IBC is pleaded to support this initiative and we look forward to working with all MPPs to make our roads safer for all Ontarians.”

“Anybody who drives here in Ontario has encountered other drivers who are staring down at the dimly lit screen of their cellphones as opposed to paying attention to the road,” Fedeli said. “Not only will this [bill] save lives, it will be an important educational initiative. The legislation will provide more awareness and make it crystal clear to new drivers that texting while driving is unacceptable.”