The mayor of the District of Chetwynd in northeastern British Columbia declared a state of local emergency on Wednesday following a “very heavy rainfall event.” 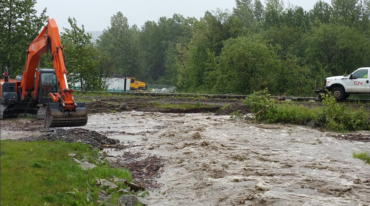 Seventy-nine millimetres of rain fell in Chetwynd as of noon Wednesday. Photo: @Q99liveFM.

“We all need to take measures to ensure our families, structures and livestock are safe at this time,” Mayor Merlin Nichols said in the release. “Sandbags are available outside the Chetwynd Public Works yar compound for those who need them.”

Local state of emergency underway in #Chetwynd b/c of torrential rains. pic.twitter.com/73jknQKQLL

A flood watch means that “river levels are rising and will approach or may exceed bankfull. Flooding of areas adjacent to affected rivers may occur.”

According to an advisory from the RFC, rainfall from an “Alberta Low” has caused rapid increases in water levels in streams overnight. “Water levels in smaller streams at higher elevation have risen rapidly today and are forecast to continue rising through Thursday in the Peace region with flooding in low-lying areas,” the advisory said. “Water levels in major streams in the region are expected to continue to rise through Friday and possibly Saturday.”

Based on current precipitation forecasts and streamflow conditions, flood forecast modelling indicates flooding is likely along the following streams and their smaller tributaries by Thursday and into Friday:

Now I'm hearing reports of a townhouse on fire in Chetwynd. Not confirmed, but this photo's going around Facebook. pic.twitter.com/21rJYVogPF

Recent photos circulating of Facebook on the current situation in Chetwynd pic.twitter.com/7siYdlqMJo