KAMLOOPS, B.C. – The British Columbia Cattlemen’s Association says wildfires have inflicted a terrible financial and emotional toll on its members. 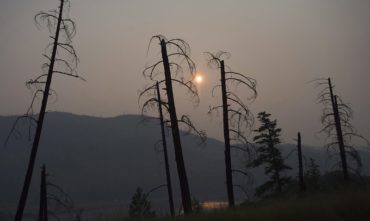 Burnt trees are pictured in front of a smoke-filled sky near Old Fort, B.C., Tuesday, July 11, 2017. Over one hundred wildfires are burning throughout British Columbia, forcing thousands of residents to be evacuated or on put on alert. THE CANADIAN PRESS/Jonathan Hayward

Association manager Kevin Boon says wildfires that broke out earlier this month in B.C.’s Cariboo and Chilcotin regions are estimated to have charred about 1,000 square kilometres of ranch land.

He says cattle, fences, feed and infrastructure have all been destroyed.

He says the federal and provincial governments have offered assurances that assistance will be provided, but the extent of the help or how it will be delivered is still unknown.

Boon says ranchers are in the process of tallying the damage. (CHNL)