Bank of Canada keeps key rate at 0.5% amid stronger yet uncertain global economy

OTTAWA – The Bank of Canada is holding its benchmark interest rate at 0.5 per cent as it sees the stronger world economy continuing to face “undiminished” uncertainty. 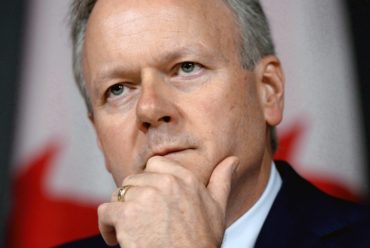 Governor of the Bank of Canada Stephen Poloz looks on during a press conference in Ottawa on Wednesday, July 13, 2016. Poloz says it’s too soon for the central bank to factor Donald Trump’s election win into its decision making. THE CANADIAN PRESS/Justin Tang

In making the scheduled announcement Wednesday, the central bank said its decision also came as the economic environments in Canada and abroad had largely moved forward in line with its expectations.

“Economic data suggest that global economic conditions have strengthened,” the bank said in a statement.

“However, uncertainty, which has been undermining business confidence and dampening investment in Canada’s major trading partners, remains undiminished.”

The bank noted how Canada’s economy experienced a healthy rebound in the third quarter from a slump earlier in the year. It also underscored its prediction that Canada would see “more-moderate growth” over the final three months of 2016.

The decision to maintain the rate was widely anticipated by experts and came ahead of an announcement next week by the U.S. Federal Reserve, which is expected to raise its key interest rate.

Last week, Bank of Canada governor Stephen Poloz addressed how the bank views the uncertainty following the U.S. election. He said it was too soon for the central bank to factor the potential impacts of president-elect Donald Trump’s election win into its decision making.

The bank said inflation, which it carefully analyzes when making rate decisions, was slightly below what it had anticipated, in large part because of lower food prices.

The statement pointed to recent gains in Canadian employment, but noted that considerable economic slack remained present when compared to the United States.

On the downside, the central bank said that business investment and non-energy goods exports in Canada continue to “disappoint.”

But he said he still believes the chances of a rate cut any time soon remain minimal and he expects the bank to leave the rate at 0.5 per cent throughout 2017.

“Even with a much-more upbeat financial market environment overall, I think the bank still has significant concerns about the weakness in exports and business investment, in particular,” said Porter, who added that fresh trade data this week showed that, yet again in 2016, the monthly export volumes continued to fall.

“Even excluding the resource sector and the energy sector, we’re seeing exporters struggling a bit – and that’s even with a Canadian dollar that most would gauge to be fairly competitive.”

“Consumption growth was robust in the third quarter, supported by the new Canada Child Benefit, while the effects of federal infrastructure spending are not yet evident in the (gross domestic product) data,” the bank said in its brief, one-page statement.

It predicted that the recent tightening of financing rules for real estate would help slow the continued rise in Canadian household debt.

This was the bank’s final rate announcement for 2016. Its next decision, which will be accompanied by a new batch of economic projections, is scheduled for Jan. 17.

In October, the Bank of Canada downgraded its growth outlook and Poloz said its governing council actively discussed cutting the key rate before deciding to keep it on hold.

Last week, a data release showed the Canadian economy had slightly exceeded expectations in the third quarter to grow at its fastest pace in more than two years.

That increase in real gross domestic product by 3.5 per cent marked a rebound from a second-quarter contraction.

Experts had predicted the economy to bounce back from the second-quarter slump, which was largely due to oil-production shutdowns linked to May’s Alberta wildfires and scheduled maintenance at oilsands facilities.