The BC Wildfire Service is making an interactive map that displays details and locations for specific registered fires available on its website. 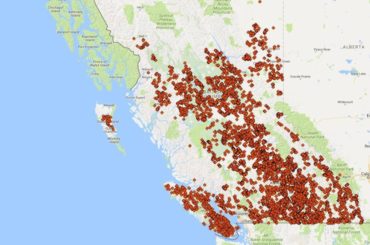 Although wildfires are rare in British Columbia at this time of year, smoke from legal, registered open burns is often mistaken for smoke from a wildfire, the provincial Ministry of Forests, Lands and Natural Resource Operations noted in a press release on Friday. This is especially true in late fall when such fires are often lit to dispose of vegetation and wood debris.

To help members of the public locate these registered burns, the BC Wildfire Service website is featuring an interactive map that displays details and locations for all active Category 3 burn registrations, as well as any registrations that have expired in the last seven days. According to the ministry, a Category 3 fire is one that burns material piled more than two metres high or three metres wide; stubble or grass over more than 0.2 hectares; or more than two piles of any size.

Registered open burns are typically conducted on industrial sites, private property or farms to dispose of debris or clear fields for new crops, the ministry explained in the release. These burns can be done in the fall and spring when the wildfire risk is generally low. Burn registration numbers are logged into the Open Fire Tracking System, which allows the BC Wildfire Service to map and track open burning activity throughout B.C., the release said, adding that smaller Category 2 open fires (such as backyard burns) do not require a registration number and are not displayed on the interactive map.

The Wildfire Act sets out specific requirements that anyone who does open burning must adhere to and all such fires must also comply with air quality control legislation.

“Open fires can create significant amounts of smoke and appear to be quite intense (especially at night) even though they are burning safely within their planned boundaries,” the release said.