Ratings firm A.M. Best Company said on Friday that it does not anticipate taking any rating actions as a direct result of plans for the United Kingdom to exit the European Union (EU), “although the cost implications of continuing to access EU business and any resultant downturn in the U.K. economy are likely to weigh on insurers.” 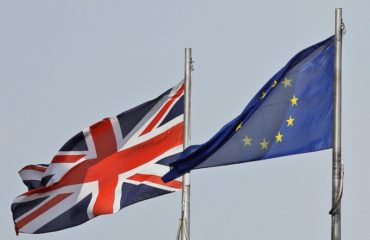 FILE – In this Thursday, Aug. 18, 2016 file photo, a Union Jack flag and a European flag blow in the wind in front of the city hall in London. To kick off the formal process of pulling out of the bloc, Prime Minister Theresa May will have to trigger Article 50 of the EU Treaty, which will give both sides up to two years to agree to the terms of the divorce. May has said that she will start the process by the end of March – meaning that Britain can expect to be out of the EU by mid-2019. But many uncertainties about the withdrawal process remain because Article 50 has never been used before. (AP Photo/Frank Augstein, file)

In a new Best’s Special Report, titled Brexit Uncertainties Weigh on U.K. Insurers but Rated Entities Able to Withstand Pressure, the ratings firm stated its opinion that there are three key issues that could impact the U.K. insurance industry in the wake of Brexit – the ability to continue to access EU business following a loss of passporting rights, the economic fall-out and regulatory developments.

“The ability to continue to conduct cross-border business throughout the EU is principally a concern for Lloyd’s, the London market and other commercial insurers,” said Catherine Thomas, A.M. Best’s senior director of analytics, in a statement. “To continue to underwrite EU business, these companies are likely to need to establish an EU-domiciled subsidiary, if they do not already have one. This would have associated costs, operational requirements and resourcing implications.”

The United Kingdom’s vote to leave the EU has resulted in “considerable uncertainty” regarding the U.K.’s economy, which could have a negative impact on domestic insurers’ premium volumes, A.M. Best suggested. However, despite concerns that an economic downturn could impact capital adequacy if widespread corporate downgrades affect the credit quality of U.K. insurers’ investment portfolios, A.M. Best does not expect there to be a deterioration in the quality of investment portfolios in the near term.

Loss of passporting rights is another concern, although “it is expected that the impact on the retail non-life U.K. insurance sector will also be minimal, as the majority of insurers are underwriting domestic business only,” the report said. “However, the ability to continue to conduct cross-border business throughout the EU is a pressing consideration for Lloyd’s, the London market and other commercial insurers.”

A.M. Best added that 11% of Lloyd’s total gross written premiums came from the European Economic Area (excluding the U.K.), while for the International Underwriting Association, “7.3 billion [pounds] of premium currently written in the London company market will potentially be directly affected by a change in rules governing UK participation in the EU single market and its passport regime.”

As a consequence of the U.K.’s exit from the single market, insurers domiciled in the U.K. would no longer be directly subject to Solvency II regulation, the statement went on to say. “Equivalence is likely to be granted,” said Yvette Essen, A.M. Best’s director of research and communications, in the statement. “The Prudential Regulation Authority has established itself as a strong regulator, and has been strict with its application of Solvency II. Without equivalence, reinsurers may have to post collateral to support EU-sourced business.”

In conclusion, A.M. Best does not expect to take rating actions as a direct consequence of Brexit, but “increased economic and regulatory uncertainty, as well as the potential for higher barriers to trade, overall, is a credit negative for the U.K. insurance industry.”

As terms of the exit are negotiated, A.M. Best will continue to discuss with rated companies what prospective changes will mean for their competitive positions and ability to continue to access business in the United Kingdom and the EU, Thomas said. Any impact on revenue or profitability will be taken into account in our assessment of a company’s profile and operating performance.