Broker calling for ‘fair treatment’ of some policyholders affected by B.C. wildfire crisis

A British Columbia-based brokerage is calling for statutory change to standardize the extension of insurance coverage for policyholders affected by active wildfires in the province.

“We’ve had a few situations where some customers have been left without insurance at a time they need it most. We were battling to find them coverage or extend their policies, for various reasons,” said David Edgar, chief broking officer of CapriCMW, a member of the Canadian Broker Network.

In some instances, customers’ properties were in an area where, prior to the wildfire crisis, some insurance carriers weren’t writing a certain class of business due to the hard market. In other cases, the customers’ properties were within 55 kilometres of an active wildfire and their insurance policies were about to expire — or had expired — during the fires. Some carriers restrict binding new policies or don’t extend or renew coverage during a state of emergency for properties within that radius of the event.

Canadian Underwriter has heard in the past that insurers typically won’t allow binding if there is an active wildfire within a 50-kilometre radius of a client’s property. The restriction area varies by insurer — it could be 25 kilometres or 100 kilometers — and is by map, and not necessarily by driving.

“Most insurers, reinsurers and managing general agents are doing the right thing during the wildfire crisis by extending coverage for customers whose insurance is expiring or renewing while a wildfire is within 55 km of the insured property,” Edgar said. “Insurers’ declining to extend coverage may be seen as unfair treatment.”

In these cases, with the most recent affecting a large hotel client last month, Edgar said he’d managed to escalate complaints. With the help of the Financial Services Authority of B.C. (BCFSA), Insurance Brokers Association of B.C. (IBABC) and Insurance Bureau of Canada (IBC), conversations with the carriers resulted in extension of coverage for those affected. 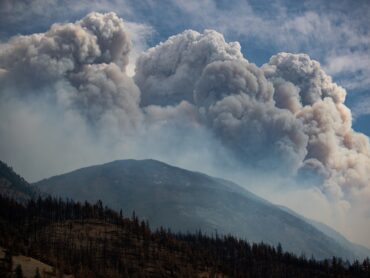 A pyrocumulus cloud, also known as a fire cloud, produced by the Lytton Creek wildfire rises into the sky from the fire burning in the mountains above Lytton, B.C., on Sunday, August 15, 2021. THE CANADIAN PRESS/Darryl Dyck

If a broker is unable to escalate the matter, a customer is also able to file a complaint with the General Insurance Ombudsman or take the matter to court, which can be costly and time-consuming, Edgar added.

He has since written a paper on the matter offering several recommendations and is lobbying with other like-minded brokers for statutory change, he said.

“The failure lies within the regulatory environment,” Edgar said. “I do believe that B.C. will lead the country in adding a declaration of emergency to the statutory conditions and that other provinces and territories will follow suit in order to achieve harmonization across the country.”

The brokers have met with the BCFSA, IBABC and IBC, Edgar said.

Rob de Pruis, director, consumer and industry relations at the IBC, said a legislative solution may not be the right solution.

The current process is to include a declaration of emergency endorsement in a policy, which extends cover when an emergency is declared until the event is over, de Pruis said.

“The other way [to address the issue] is by speaking to the individual underwriters and explaining the situation,” de Pruis said, adding that the IBC had been involved in facilitating such discussions a few times where insurers had then voluntarily extended the affected policies.

de Pruis added that emergency situations like these “are very rare and temporary […] or they happen coincidentally due to insurers’ risk appetite in a hard market.”

The IBC, therefore, does not recommend a standardized approach. “Insurers have different parameters for coverage and at the end of the day, that’s helpful in placing business. As an industry we can find a solution ourselves if we fully understand the risks.”

The IBC would continue to facilitate discussions and connect customers with insurers to find solutions on a case-by-case basis, he added.

Edgar said his group will continue looking to regulators to mandate a change, since not all insurers are willing to add an endorsement for declaration of emergency.

Feature image: Helicopters fly past the Tremont Creek wildfire as it burns on the mountains above Ashcroft, B.C., on Friday, July 16, 2021. THE CANADIAN PRESS/Darryl Dyck

4 Comments » for Broker calling for ‘fair treatment’ of some policyholders affected by B.C. wildfire crisis